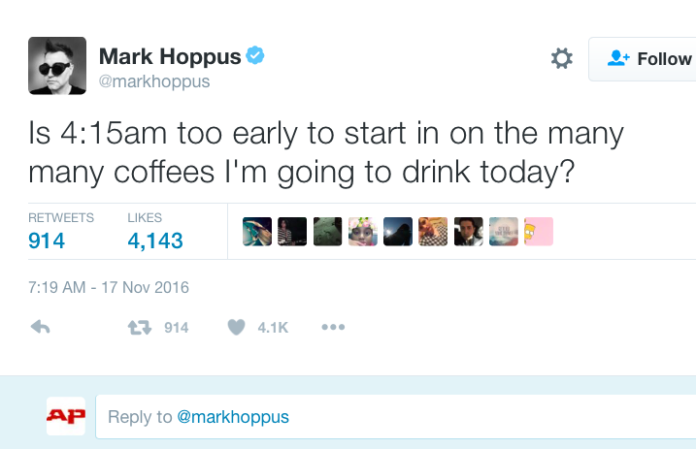 From updates about recording to their latest thoughts on food, their surroundings and T.V., our scene’s tweets are not to be missed. That’s why we’ve rounded up some of the best of the week from your favorite musicians.

Read more: 16 things you need to know that happened this week

Check them out below and let us know your favorite in the comments!

If the moon was a giant black light, I would be fucked ��

The Maine are one step closer to finishing up their album

State Champs prove they have the most fun group chat

here’s what happened when we filmed the video for ‘guys my age’ https://t.co/RJLVfBNa7y pic.twitter.com/Ty2wPjhvrI

Keeping myself busy during our time off. Lots of music to be made for things and other people. The studio is my favorite part of all this.

Read more: Watch these teens try to guess scene music from the 2000s

Is 4:15am too early to start in on the many many coffees I'm going to drink today?

Wish I was in the states so I could drink this magic potion pic.twitter.com/0InVGWjakO

Waterparks’ Awsten Knight makes us wish we were that puppy

IF YOU AREN'T THIS PUPPY TODAY IMMA NEED YOU TO TAKE 3 STEPS BACK pic.twitter.com/VFKSlf1QRx

Set Your Goals are getting everyone hyped for new tunes

So many sounds are happening for this new record it's gonna be like an explosion of pop melodic sonic speaker blow outs!