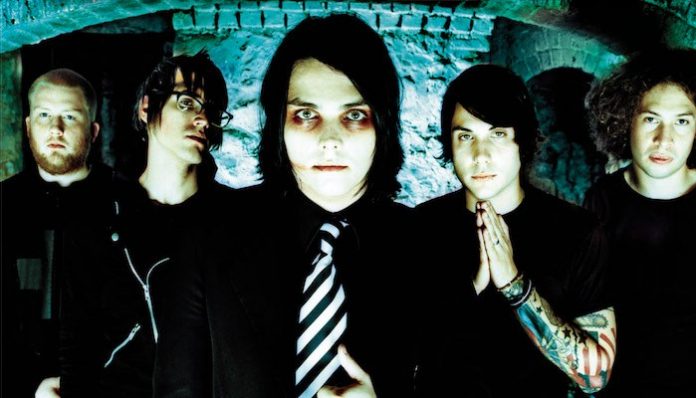 However, it looks like a lot of fans had a hard time getting their hands on the new collab this week.

Earlier this week, My Chemical Romance debuted a cryptic teaser that got a lot of fans talking. The visual of a white rose catching fire with “Give ‘Em Hell Kid” playing in the background sparked a lot of theories about what MCR could be teasing.

Not so coincidentally, HipDot shared the exact same teaser a day prior, adding fuel to the rumor fire that a makeup collab was in the works.

Then, on Wednesday, My Chemical Romance confirmed that a new makeup collab inspired by Three Cheers For Sweet Revenge was on the way with another cryptic teaser.

Read more: We finally know where and when we can watch ‘Paradise City’ season 1

HipDot and MCR teamed up to create a Three Cheers For Sweet Revenge-inspired eyeshadow palette ($24) from our emo dreams. The collaboration also includes a double-ended retractable eyeshadow brush ($12) and a double-ended black liquid eyeliner pen ($12) with two different shaped application tips. All of the items in the makeup collection also feature the era’s iconic red and black colors and MCR’s nostalgic logo.

The Three Cheers For Sweet Revenge collection went on sale at noon PST on Thursday, Dec. 10. However, it looks like the entire collab sold out in minutes. Some My Chemical Romance fans revealed on social media that they couldn’t even access HipDot’s site when the sale began. Meanwhile, others say a sold out page came up just minutes after the collab became available.

The My Chemical Romance makeup collab sold out in like 5 minutes, I literally stepped away from my computer for a few minutes and they were all gone 🥺 pic.twitter.com/zmcEULgHU4

Read more: This ‘Jackass’ reunion is exactly what we needed in 2020

I can’t even figure out where to find it! The hipdot website isn’t showing it at all

You were 7 minutes late. By the time we could even find the fucking make up. It was sold out cause you didn’t even stock enough for it to last 2 minutes. Hope ya feel proud of yourself for disappointing so SOOO many people today. @MCRofficial #MCRxHIPDOT @HipDotCosmetics

Read more: Here are all of the collabs on Taylor Swift’s surprise album ‘evermore’

my chemical romance every time something of theirs sells out in under 5 minutes pic.twitter.com/FWlmnrPjmo

I’m not ok… MCR makeup collection sold out in under 4 minutes and @HipDotCosmetics didn’t even have it on their website…. disappointed. #mcr #mychemicalromance

My Chemical Romance had a makeup launch and it sold out instantly Im so upset 😭😭😭 pic.twitter.com/a7ucRkrUjT

Naturally, fans are comparing this situation to when tickets went on sale for My Chemical Romance’s return show. It only took about three or four minutes for all of the show’s tickets to sell out. This, of course, led to a lot of frustration and defeat amongst MCR’s fanbase.

Read more: Cynic bassist Sean Malone has died at the age of 50

Similarly, My Chemical Romance added even more shows to their 2020 return tour after various dates sold out in minutes. Even though the dates have now been rescheduled for 2021 due to the coronavirus pandemic, fans are still struggling to get ahold of tickets for the upcoming run of shows.

Seeing as the Revenge makeup collab sold out in a blink of an eye, fans are comparing this situation to what they’ve experienced with trying to get tickets to MCR’s shows.

Getting @MCRofficial RETURN tickets last year was easier than getting this palette from @HipDotCosmetics 🤦🏻‍♀️ 😂 Hopefully there is another launch because I would really like to have this! #MCR #MCRxHIPDOT pic.twitter.com/qLh4elIHQh

Read more: Here’s how long it took for Post Malone’s new Crocs collab to sell out

please PLEASE do not attack hipdot. they are a smaller business and its not their fault at what happened. there were just more people than excepted obviously and you shouldnt attack them for it. it wasnt a bad launch,,, were yall here for the mcr return show?

Getting tickets to the MCR reunion tour was EASIER and BETTER and LESS STRESSFUL than buying the MCR makeup from Hipdot. H O W is that possible. @HipDotCosmetics, if y’all need social media management lessons or help, I do that for money. Or free makeup. Or both 😬

The My Chemical Romance make up launch was exactly like the ticket sales, down to the line to check out 😭💔💔💔💔

It’s unclear if the My Chemical Romance x HipDot collab will be restocked in the future.

What are your reactions to My Chemical Romance’s makeup collab selling out? Were you able to buy the collection? Let us know in the comments below.