With My Chemical Romance’s return looming, one caption regarding Frank Iero and Mikey Way’s Fender guitars sent fans into a frenzy about the possibility of a full reunion tour.

We’re just over a day away from My Chemical Romance returning to the stage for the first time in 7 years. As fans anticipation grows, members such as Mikey Way and Frank Iero have continued to get us hype with teasers for the big day.

Way took to Instagram overnight to share a look at the picks he’ll be using for the show alongside Iero, Gerard Way, Ray Toro and Jarrod Alexander. Now, Iero has followed up with a peek the guitars for the big night, but one caption from Fender regarding the word “tour” has sent fans into a frenzy.

Iero and Way had visited Fender within the past month. Then today, Fender took to their social media to share the duo picking up the guitars for the reunion gig. 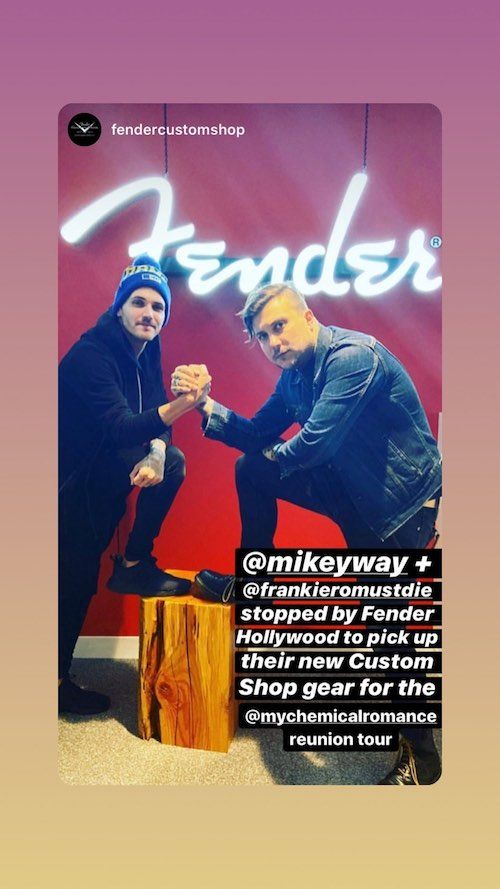 In addition to the first image, the brand posted a video of them revealing their new instruments and closeups of them, which you can see below.

However, it was one of the final shots on Fender’s story that sent fans into the biggest frenzy.

Fender ended their story with some shots of the instruments, saying “Look out for these on the @mychemicalromance tour starting tomorrow in Los Angeles,” which Iero shared on his own story. 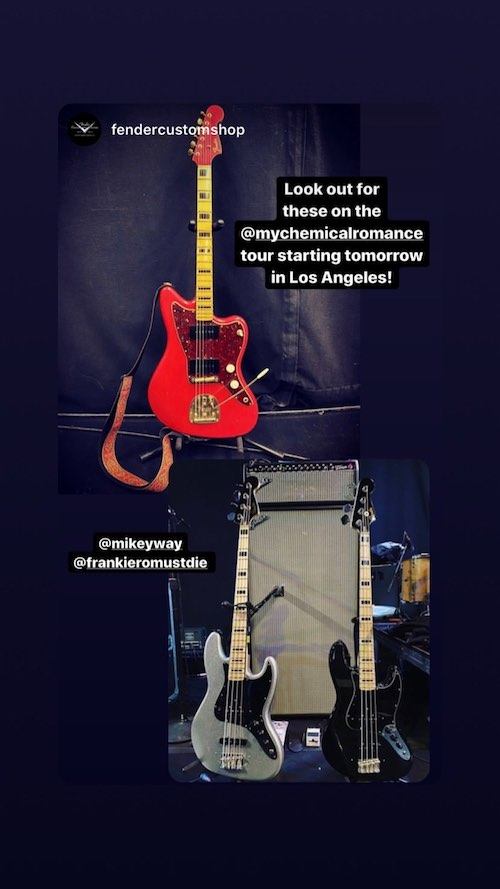 Following initial reports of a tour following the Los Angeles show, the band haven’t confirmed nor denied speculation. With the Los Angeles show immediately selling out and only shows in Australia, New Zealand and Japan following, fans rightfully lost it on social media.

my eyes Zooming in on the mcr reunion TOUR caption from franks ig repost on his story , i …. its Happening…..,, tears r gathering in my eyes also @ the him and mikey clip

The band haven’t officially announced anything outside of the LA show and festival appearances. The word “tour” might also just be referring to those already announced slots, so only time will tell if it means anything.

More on the My Chemical Romance return

As mentioned, Way just unveiled a very small part of his performance. He took to Instagram last night to show off his picks for the upcoming gig tomorrow night.

The My Chemical Romance bassist posted a picture of his bass picks last night. They’re white and feature the iconic text “Mikey Fuckin Way” in black. Check them out below.

The caption reads “I’m fuckin ready!” The bag of picks is rather large and we don’t expect Mikey to break/fly through them in one night so hopefully, some lucky fans can get a cool piece of memorabilia from a night I’m sure they’ll never forget.

Ahead of the pick reaveal, last week, Way thanked Fender for his two new instruments.

“FLOORED. I want to take a minute to thank my @fender family for creating these two special bass guitars for me. A few years ago, I jumped back to my roots and returned to the Jazz bass after playing Mustangs for some years. I had the idea of recreating my signature model in Jazz form and @mschulz83 helped make it a reality. He also upped the ante and made a black-flake companion – which is absolutely stunning. I can’t wait to take these for a ride. A billion thank yous”

Following tomorrow’s big return, the band will head to Australia, New Zealand and Japan in 2020. Check out the full list of dates below with tickets here.