Read more: The 1975 announce North American tour, drop “Me & You Together Song”

Check out a screenshot from the “Na Na Na” video below. In it, you can see the graffiti-covered right side reading Vaya is the same in the new teaser.

Fans theorized it could also mean anything from more Wiccan-related symbols to conveying “2020.”

I’m guessing since the symbols are repeating it may mean 2020?? I have no fuckin idea though

https://t.co/8MGvN1183Y idk what this means but it’s still witchcraft related

“If you were to pay close attention, I say, ‘That rumor is like a broken clock…’ Some might think that I meant to say broken record, but I did not. Because even a broken clock is right twice a day. ?,” he tweeted.

In true MCRmy fashion, fans immediately started theorizing what all of this could mean. Check out some of the best reactions below.

STOP BEING SO DAMN CRYPTIC YOU AINT TWENTY ONE PILOTS

Hey! I'm so glad you reached out. I'm actually at capacity / helping someone else who's in crisis / dealing with some personal stuff right now, and I don't think I can hold appropriate space for you. Could we connect never instead / Do you have someone else you could reach ou https://t.co/gQ3wVhJKqC

I think they are gonna drop uk and us tour dates but I also think there’s gonna be some kind of surprise….not new music yet but maybe a new concept that their next album will be about??! Idk

My Chemical Romance have been keeping fans on the edge of their seats since they announced their return on Halloween. With the record-breaking reunion show in December having come and gone, the world is eager for more tour dates and anything confirming new music.

On Jan. 3, the band’s account posted an mysterious image of a caped person. The figure is wearing a skull mask with a dagger in their belt. With it was a U.K. flag emoji, leading fans to theorize a U.K. show would soon be announced.

On Jan. 9, the band has posted again, flipping their imagery this time around. The skull is now being used as the caption while a U.K. flag hides among an array of symbols. The 12-second clip quickly cycles through the symbols. It presents a pattern of the same few at first before rotating them throughout.

Some of the symbols will look familiar to those who have been following the band’s subtle hints since their return. While not present in this teaser, MCR’s return was marked by four symbols composed within a new logo: Clarity, Courage, Sacrifice and Devotion.

Along with the “Cella Magnani” statue present in the return poster, Merlin and more, fans have dug deep to compose theories of how this could mean new music. Things got even more involved when the band added symbols to the mix at their reunion show as they covered a merch trailer parked outside of the Shrine.

A Reddit user decoded the new merch trailer symbols, suggesting they’re taken from tarot cards. The user explains in-depth that they believe Reversed Ace of Swords, Reversed Moon, Upright Tower and Upright Ace of Wands are what’s being represented, and you can see their meaning here.

A better look at the new symbols on the merch trailer! pic.twitter.com/Y0XEIgh98w

As you can see, four of the symbols from the merch trailer are now in the below teaser the band has shared.

In addition to the symbols from the merch trailer, there are several symbols that appear to be from some sort of alphabet. Many believe its Theban alphabet, which is used by practicing Wiccans. Those who have decoded it believe it’s pointing to an announcement for June.

Read more: Can you match the lyrics to the correct My Chemical Romance album?

Y’all @MCRofficial posted a gif of symbols that translates to June X M using the ‘Theban’ alphabet and in Roman numerals X M would be 10 1000, MMXX is the Roman translation of this year! 2020! June 2020!! Y’all’s cryptic messages sending me spiralling tbh ? ? ?

With MCR already being announced for Download Melbourne, Download Sydney and Download Japan, some are theorizing this means it could have something to do with Download U.K. The latter festival will be headlined by Kiss, Iron Maiden and System Of A Down June 12-14.

i immediately recognised this as the Theban alphabet, glad to see my Tumblr witch days paid off (also it says June 10th which is technically the first day of download ) https://t.co/f5AJcVYCtp

Frontman Gerard Way continued to spark theories of magic, angels and witchcraft being a theme with his return outfit in December. With this in mind, using the Theban alphabet in this latest teaser makes sense.

The shirt Way wore to perform, as well as a jacket and undershirt later, features a sigil. Exactly the significance of that sigil is still up for debate but fans have continued to theorize.

I found this ? It was in a tweet… Can't find it now though… pic.twitter.com/DPcYG25U5a

Note: There are too many “houses” for this to be a natal chart. It appears to be a personal sigil, which could have an infinitude of potential meanings personal to @gerardway. OR, it could simply be a logo or symbol we don’t recognize! Does anyone recognize it? #MCR

While fans prepared themselves for a potential U.K. show announcement set for June, another image started a whole other conversation about possible new music. On Jan. 14, the band took to their social media to share a black-and-white image of what appears to be a hospital room. With it, is a simple and nondescript vampire emoji.

With a sheet pulled across what looks like a hospital bed, it appears that there is a figure being covered as its nose protrudes from the center.

Fans immediately drew comparisons to The Black Parade mythology and specifically The Patient in the “Welcome To The Black Parade” video. Some thought it could be alluding to some sort of sequel to the album for a new record. The track marked the final one the band played at their reunion show in December, so take that as you will.

Are y'all seeing this too or am I the only one…? https://t.co/MtBJRsw61E pic.twitter.com/ZoQBJ0oNMK 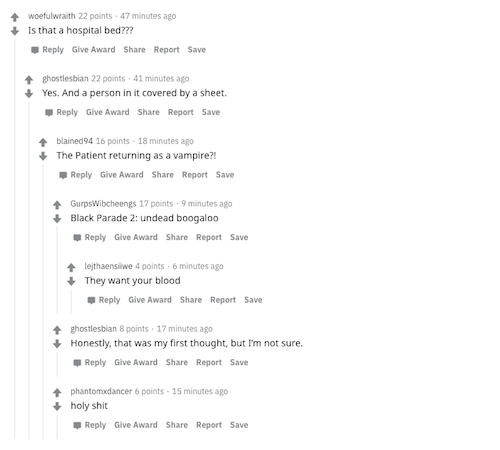 With the vampire emoji, fans also pointed to their debut I Brought You My Bullets, You Brought Me Your Love. Other fans pointed out other imagery within the post also alludes to the album.

Some fans have theorized the image is combining all of the eras into one.

As we look to the sharp edge of that small part above….”We're hanging out with corpses” and it really looks like one of those scary hospitals you can find on old horror movies. So we have first a skull and now a vampire, that could probably represent gee..

THE PATIENT? IS A VAMPIRE NOW?

Others are hoping this means a new album is near, drawing back to the angel theory for a potential new era.

is it just me, or does it look like an angel under the sheet?

like it's sitting up, but their head is hanging down in the middle and the side bumps are their wings?https://t.co/xZTWOB74Ur

Others have drawn a connection to the skull-faced figure the band shared at the beginning of the month. “What’s the connection?” Reddit u/3raz3t posted. “Could it be someone this grim reaper killed? What’s with the vampire emoji?”

Clarity on all of this imagery still need to be confirmed, but band will kick off confirmed dates in March. They’re hitting Australia, New Zealand and Japan, and you can grab tickets here.