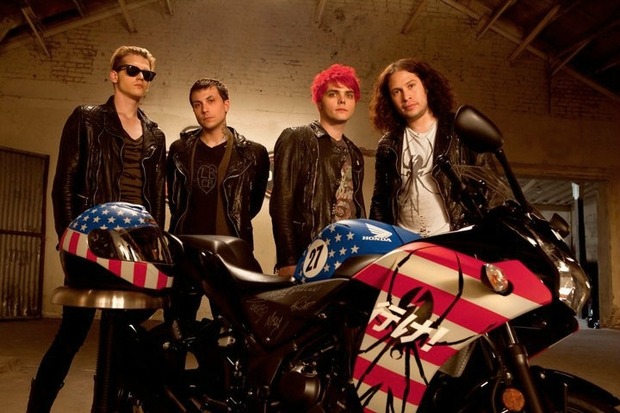 My Chemical Romance will release their Conventional Weapons sessions starting in October, with two songs a month over the course of five months. The material originated right before the band wrote Danger Days.

A track listing, release schedule and preorder information will all be revealed soon. Read a statement from MCR guitarist Frank Iero below.

Please allow me to take a trip down memory avenue for just a minute…. in the year 2008 it was the best of times, it was the worst of times…after years of constant work and travel, The Black Parade had come and gone, and as a band My Chemical Romance had achieved almost every goal we had set for it. Records were sold, doors were kicked in, enemies made and vanquished…I really felt we had made a difference. If there was ever a time to run the credits, call it a day and go out on top …this was it. But here we were, still relatively young and a wide open future seemed to be a blessing and a curse when wondering 'what the hell comes next?' A large percentage of my being was convinced the band was over at that point, and so, as it does, depression crept it's way in.

I have grown up and spent most of my early adulthood being in this band, the thought of that chapter closing was a harsh pill to swallow. But that November I got a call from Gerard that snapped me out of it. We talked for awhile about the band, about why we loved and hated it. We left the conversation with promises to to communicate and plans for a new record in place. In the coming months we forged ahead. Ideas started to take shape….there were conversations about what the songs should sound like, the trading of mix tapes for inspiration, and finally flights were booked to our adopted home of Los Angeles for pre-production.

Looking back to that first phone call, what I think we meant to say to one another was “I miss you. I like making music with you, and in spite of all the other shit that comes with it, good and bad, I still wanna do that.” When you're in a band for as long as we have been and you've reached a certain 'level'…sometimes all you know how to do is make records. You tend to forget how to do the simple stuff. Like just connect with your friends and make music. No rules, no expectations. Hindsight being 20/20, maybe we should have just locked ourselves in a room and made a bunch of noise until we were inspired to collectively say something on a record. That's not what ended up happening. Instead we planned on making a specific kind of record, we wrote songs to fit that specific plan, and then we flogged ourselves for it not feeling right, organic, or complete.

After almost a year of beating ourselves up, we ended up shelving those ill-fated songs, and reconnected with Rob Cavallo and Doug McKean to salvage our band and make what would become Danger Days.

To kill the misconception, I don't think the songs we wrote before Danger Days are bad songs by any means. In fact, I kinda think some of them are among my favorites we have ever written. A lot of them are kinda fucking rad….they just so happened to have been created in the wrong place, at the wrong time, and we as their parents were not ready to raise them just yet…and so they sat and waited.

They hung out on my iPod and every few months I would visit them and think '…damn.' At first they gave me mixed feelings…I liked the songs but I couldn't help associating them with the hard times from which they were created. It made me a bit uneasy. But as time passed I began to enjoy them more and more, and was able to look upon the past a bit more fondly. They were my secret playlist, only for me. Like some unknown band that I discovered and loved, and that few others in the world had ever heard.

The more time went by, the more I toyed with the fantasy of releasing those songs. What would people think? Would they like them as much as I do now? Or was our first instinct of locking them away, never to be heard from again, the right move?

Recently we had a band meeting, we ended up talking about the past, and together we listened to those songs we created almost 4 years ago. We discussed the the way those songs made us feel, how they led us to where we are now and what the fate of those songs should be. How can we fully move on if we continue to hide the past? Together we decided that this chapter in My Chemical Romance's history no longer needed to be locked away.

So beginning in October we will be releasing 2 songs a month for 5 months. 10 songs in total from the Conventional Weapons sessions we did back in 2009. We hope you enjoy these time capsules, and that they may shed a little more light on how and where Danger Days came from, and maybe even where the future of MCR might be heading. It was the best of times, it was the worst of times…and now it is finally time to lift the veil on Conventional Weapons.

Play them loud and without judgement. Keep the Faith-xofrnk

**Check back next week for the track listing, release schedule and pre-order details.**”