Myspace songs from 2008 to 2010 recovered by internet superheroes

Nearly half a million songs have been recovered.

After Myspace lost over a decade’s-worth of material, some anonymous internet superheroes have come to save the day.

Nearly half a million songs uploaded between the years of 2008 and 2010 have been recovered an entered into an archive that anyone can use.

According to Jason Scott, the proprietor of textfiles.com, an archive coined the “Myspace Dragon Hoard,” has rescued around 450,000 songs that were deleted as a result of the Myspace server migration.

ANNOUNCING THE MYSPACE MUSIC DRAGON HOARD, a 450,000 song collection of mp3s from 2008-2010 on MySpace, gathered before they were all “deleted” by mistake. https://t.co/oIunuHF7wc includes a link to a special custom search and play mechanism that lets you search and play songs. pic.twitter.com/aGkFPDBN7r

Scott says the files were recovered by an academic group who took mp3s from the site between 2008 and 2010 while studying music networks.

“This set of 450,000 songs was done by an anonymous academic group who were studying music networks and grabbed 1.3 terabytes of mp3s to study from Myspace in roughly 2008-2010 to do so,” Scott says in a tweet. “And someone asked me, ‘Hey, do you want these, since they were lost?’ Yes, yes I did.”

This set of 450,000 songs was done by an anonymous academic group who were studying music networks and grabbed 1.3 terabytes of mp3s to study from MySpace in roughly 2008-2010 to do so. And someone asked me “hey, do you want these, since they were lost?” Yes, yes I did. pic.twitter.com/ZqQC8bYfz1

If you have any lying around, hit me up. Also, please understand the Hobbit, the searcher that goes through the Dragon Hoard, can take a bit of time to spin up the considerable search index. We’re optimizing and fixing that search up, and it will all be open-sourced. NOW DANCE

First confirmed “lost” song recovered from this hoard: “the alpha conspiracy – defend yourself swing mix”. Creator told me it was gone forever, now it’s not. Get dancing

You can check out the archive here. However, as pointed out by Mashable, the files are “named by Myspace’s CDN,” which means it will be very difficult for everyday users to search and find specific tracks. 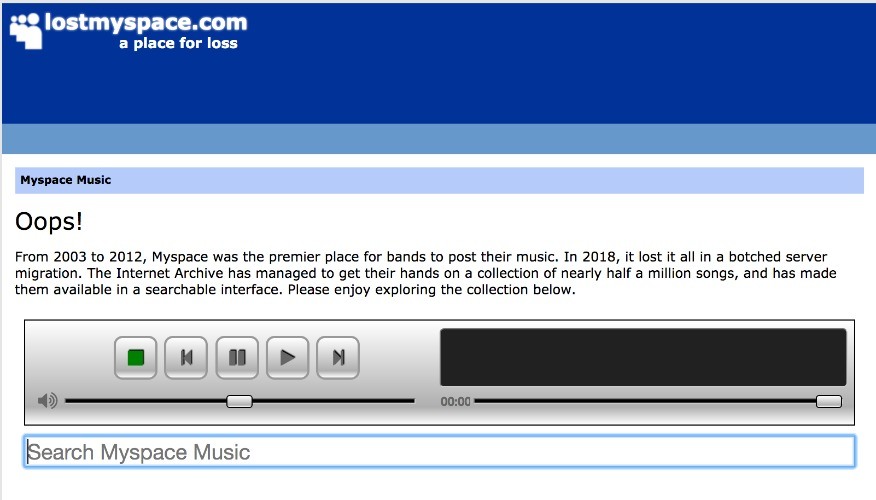 Originally, Myspace lost all pieces of music uploaded from 2003 to 2015. All in all, the loss equated to about 50 million songs from 14 million artists. Additionally, many users reported that old photos and videos would also not show up.

“As a result of a server migration project, any photos, videos, and audio files you uploaded more than three years ago may no longer be available on or from Myspace,” the site says in a statement. “We apologize for the inconvenience.”

What do you think about the impressive Myspace Dragon Hoard? Let us know in the comments below.