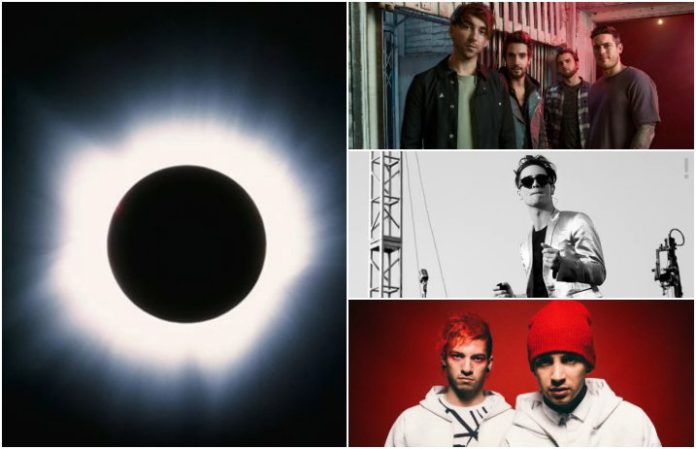 Solar eclipses are pretty dang rare, and as the NASA interns have proven, there are plenty of songs on the topic, too.

To celebrate the occasion, they put together a playlist—featuring the likes of Panic! At The Disco, All Time Low, Twenty One Pilots and more.

Check out the stellar playlist below!

Read more: Solar Eclipse 2017 playlist: 35 songs to get you hyped

The playlist post shared by NASA disects a few of the most popular songs today that mention eclipses, including “Total Eclipse of the Heart” by Bonnie Tyler, but of course, it's the emo favorites that stuck out. Two songs from Panic! At The Disco? This is what we like to see!

And Twitter was loving this playlist as much as we are:

who is the NASA intern who included Northern Downpour by @PanicAtTheDisco on the Eclipse Playlist and how do i get them promoted pic.twitter.com/jTHl9e3Aip

Clearly there is an emo at NASA and I love them https://t.co/HJjuPj6ZHA

See the eclipse playlist, curated by the NASA interns, below!

Playlist:
“Eclipse”—Lindsey Stirling
“Eclipse”—LOONA/Kim Lip
“Eclipse”—Pink Floyd
“Endless Night”—Original Broadway Cast of The Lion King
“Fly me to the Moon”—Frank Sinatra
“Galaxies”—Owl City
“Here Comes the Sun”—The Beatles
“Hometown”—Twenty One Pilots
“Let the Sunshine In”—Original Broadway Cast of Hair
“Little Star/Eclipse”—Sammy Hagar
“Northern Downpour”—Panic! at the Disco
“The Sky and the Dawn and the Sun”—Celtic Woman
“A Sky Full of Stars”—Coldplay
“The Sound of Silence”—Simon and Garfunkel
“Sun Is Gonna Shine”—Carman Cusack
“Total Eclipse of the Heart”—Bonnie Tyler
“Touch the Sky”—Disney
“Under A Paper Moon”—All Time Low
“When the Day Met The Night”—Panic! at the Disco
“Why Does the Sun Shine?”—They Might be Giants
“You’re So Vain”—Carly Simon

Now as we prep for this solar eclipse, we'll be listening (and crying) to “Northern Downpour”:

What are your thoughts on their amazing solar eclipse-inspired playlist? Let us know in the comments below!