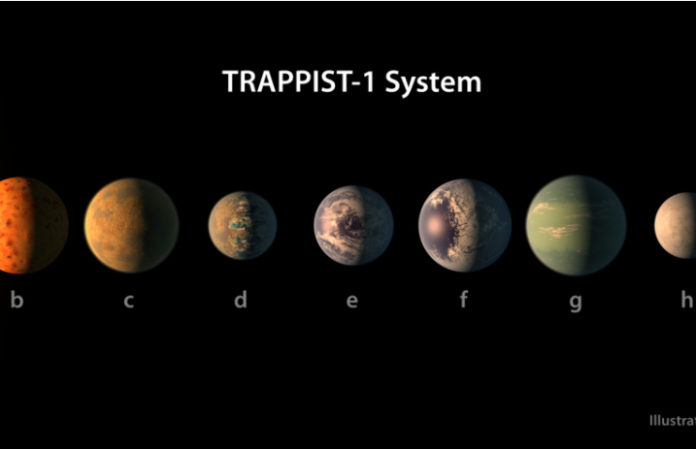 NASA has just reported that not simply one, but seven Earth-sized planets have been spotted orbiting a tiny star not very far from our own planet—and it's the first realistic opportunity for the potential of alien life outside the solar system.

According to NASA, three of these planets are firmly located in the habitable zone, the area around the parent star where a rocky planet is most likely to have liquid water. This discovery sets a new record for the greatest number of habitable-zone planets found around a single star outside our solar system.

Read more: Weezer team up with NASA for new song “I Love The USA”—listen

The dwarf star, Trappist-1, is about 40 light years, or about 235 trillion miles, from Earth at the present moment. Because they are located outside of our solar system, NASA explains that these planets are scientifically known as “exoplanets.”

In this system, some of the planets could be at the right temperature to have such things as oceans of water, based on the planets’ distance from the dwarf star. According to NASA, all seven planets could have liquid water under the right atmospheric conditions, which is the key to life as we know it, but the chances are highest with the three in the habitable zone.

“The seven wonders of TRAPPIST-1 are the first Earth-size planets that have been found orbiting this kind of star,” said Michael Gillon, the principal investigator of the TRAPPIST exoplanet survey. “It is also the best target yet for studying the atmospheres of potentially habitable, Earth-size worlds.”

And, according to NASA’s report, this is one of the most exciting discoveries they’ve made in the search for life outside of Earth.

“This is the most exciting result I have seen in the 14 years of Spitzer operations,” said Sean Carey, manager of NASA's Spitzer Science Center. “Spitzer will follow up in the fall to further refine our understanding of these planets so that the James Webb Space Telescope can follow up. More observations of the system are sure to reveal more secrets.”

And we’re not the only ones excited by this news:

The truth is out there. https://t.co/Sj68txQKZY

What are your thoughts on the potential for alien life? Let us know in the comments below!