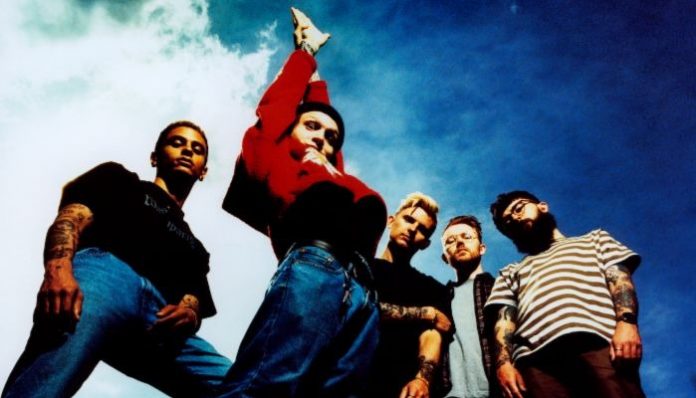 Neck Deep have shared that some big news is coming soon. The band took to Twitter in an incredibly vague post. Regardless, Neck Deep fans are in a frenzy hoping they announce a new tour or album very soon.

We’re taking a breather right now after a relentless year or five, but we’ll be back in 2020. Here’s the first taste of next year… we are very stoked to play at Rock For People 2020!

We're taking a breather right now after a relentless year or five, but we'll be back in 2020. Here's the first taste of next year… we are very stoked to play at @rockforpeople 2020! Tickets and info: https://rockforpeople.cz/en/

But since then, apart from their Spotify Wrapped, Neck Deep have remained pretty quiet about future plans. That is until Feb. 11. Neck Deep took to Twitter to post a very vague image with a link to their website. The image is captioned “Be the first to know.” The website is completely empty except for a single subscription button in the center and buttons that link to their affiliated social media accounts.

Fans are already super excited about what the news could be. Check out some reactions below.

FUCK YEEEEEES WHATEVER THIS IS BUT BEST NEWS IVE RECIEVED TODAY

what’s this big news all about mate

DONT DO THIS RN IM IN CLASS IM HOING TO CRY

Just five days ago, lead singer Ben Barlow posted a picture of him at Apple Music with the simple caption “Been busy”

While we wait for the news, check out Neck Deep’s video for “She’s a God” below.

The website is available here. Tell us what you think this big news announcement could be in the comments below.