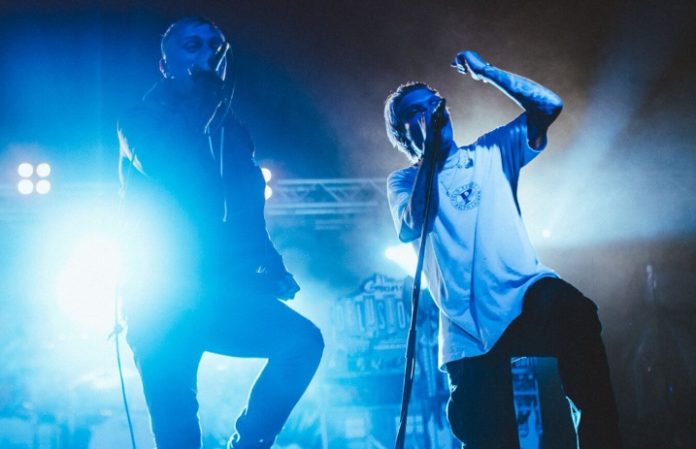 Neck Deep’s new album, The Peace And The Panic, features a special appearance from Architects’ Sam Carter on their track “Don’t Wait,” and at Leeds Festival this weekend, they had a special guest appearance from Carter himself.

Read more: Watch Architects’ Sam Carter call out groper: “I saw you f*cking grab at her”

The track is a special one on the album, and the energy on stage was incredible. Not to mention, it was their first time playing the song live.

Neck Deep’s new album is clearly a massive one for the band, who landed their first top 10 effort with The Peace And The Panic, which hit No. 4 on the Billboard 200 chart.

The current AP cover stars earned 32,000 equivalent album units in the week ending Aug. 24, and of that, 29,000 were from traditional album sales.

In issue 351, we caught up with frontman Ben Barlow to talk more about the story behind the new record and how it differs from their 2015 release Life's Not Out To Get You.

“When we were writing Life’s Not Out To Get You, we were going through a period of uninterrupted happiness. We were super-content, but as that album came out, life changed for us,” Barlow says. “Over the two years we’ve toured that record, so much has happened that I’ve re-evaluated what life is about and questioned whether just having a positive outlook is enough.”

Not to mention, the AP cover stars open up about their climb, their struggles and their haters in their most in-depth story to date. We even have and exclusive track-by-track where Ben Barlow takes us through every song on The Peace And The Panic. Pick up the new issue below!

What are your thoughts on Carter’s epic performance with Neck Deep? Let us know in the comments below!