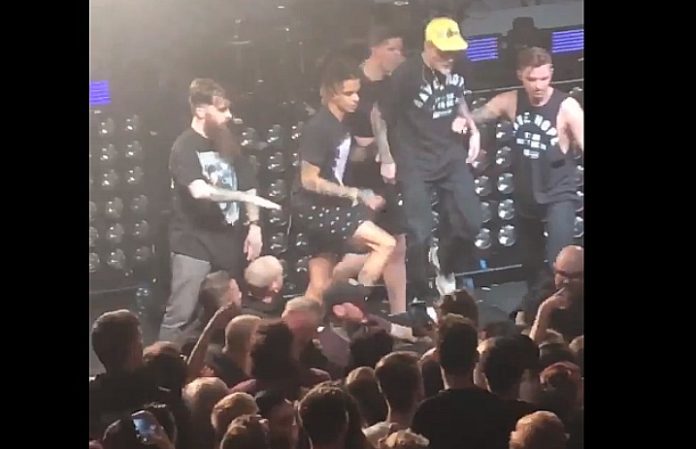 Neck Deep have released a statement regarding their Nottingham Rock City show after an incident with security forced the band to cancel. You can read the band's full statement below.

According to those attending the show, security became heavy-handed with fans along the barricade and those who were crowdsurfing. Neck Deep were quick to intervene, causing security to get rough with the band and their crew.

@NeckDeepUK THANKYOU for defending your fans. As to @Rock_City_Notts sort your staff out. The people that are supposed to keep us safe huh? pic.twitter.com/V2FCqLIJf4

Frontman Ben Barlow came out to explain the situation to the crowd, stating: “Security fucked it. There was a fight. Show's over.”

Barlow also came out after the show to apologize to a group of fans following the incident while others quickly took to Twitter to show their appreciation for the band.

Neck Deep released the following statement in regards to the events that took place at the show last night:

A Neck Deep show – any show for that matter – should be a protected and positive environment, where everyone is safe and free to enjoy music being played.

The safety of our fans is our number one priority, but no-one involved in a show should EVER be in fear of harm or injury – be that fans, crew, venue staff, security or the band.

The events that transpired last night were regretful and deeply unfortunate. Things rapidly escalated to a point that they should never have gotten to. We believe that violence is never a solution, and that everything that went down could and should have been handled better by all parties.

We are so very sorry to anyone who was in any way hurt, upset or inconvenienced last night.

All scheduled tour dates will go ahead as planned, and we will be taking extra measures to ensure that these events are never again repeated.

For everyone in attendance last night, we are working on a rescheduled date for you, and we will ensure that your original tickets will remain valid / be reissued.

Thank you all for reading and for your understanding.

The venue, Nottingham Rock City, has released a statement as well, explaining that they are still fully investigating the events that took place, believing the security staff were not “disproportionate in their response to the crowd surfing.” Read their statement in full, via the Nottingham Post, below:

We are currently still fully investigating the incident. It appears that the band took exception to the way the Rock City security were handling fans who were crowd surfing into the pit and attempting to get on stage.

This unfortunately escalated into a physical confrontation between the band and the security staff. Having reviewed the CCTV footage and spoken to witnesses, it doesn't appear that the security staff were disproportionate in their response to the crowd surfing.

We take the safety of our customers very seriously and constantly review our crowd management policy. Of course, we know how disappointing this has been for the fans who didn't get to see the band play. We hope to be able to make a further announcement on this shortly.

Neck Deep are currently in the middle of their UK tour run with As It Is, Real Friends and Woes. All scheduled tour dates will go ahead as planned, and they're working to reschedule a date in Nottingham.