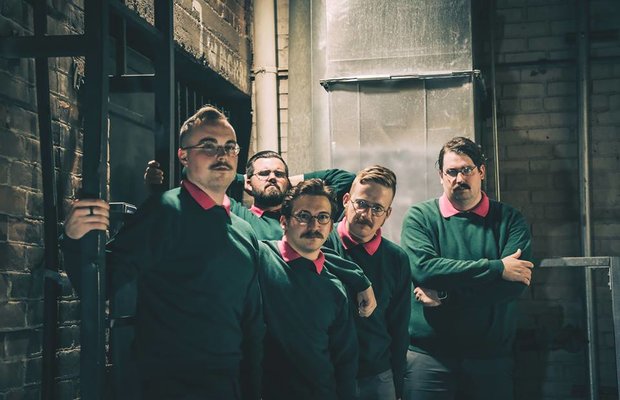 If you’re unfamiliar with Ned Flanders, he’s the suspiciously giddy neighbor of the title family on The Simpsons, and is one of the most good-natured people in Springfield. Flanders is also a die-hard Christian and is despised by Homer—so probably not the most metal character you can think of on the show.

But Okilly Dokilly has given Ned the edge he deserves by creating a Flanders-themed band that both look and sound the part. They’ve even scrapped calling themselves metal, instead deeming their music “Nedal”. Oh, and their members' names? Head Ned (vocals, screams, guitars, bass, mandolin, percussion), Red Ned (synth, vocals), Stead Ned (guitars), Thread Ned (bass), and Bled Ned (drums). They’re based out of Phoenix, Arizona.

And the swell dudes in Okilly Dokilly have at long last graced us with their debut full-length, just about a year after swooping onto the scene with their initial demos. The album is very appropriately titled Howdilly Doodilly, and the lyrical content is 75 percent direct Flanders quotes, and 25 percent other characters and originals.

The band members themselves dress in the same attire that you’ll usually find Flanders sporting, and they even have the mustaches to top it all off. In an interview with Music Feeds, Head Ned explained the origins of the band’s concept.

“Myself and Bled Ned were trying to come up with really friendly names for really angry hardcore punk bands. Okilly Dokilly came about and the name introduced the idea of us becoming the character. The puns started to flow and the reasons not to do this band dwindled like a box of donuts in the break room at the plant.”

With songs on the album titled things like “Flanderdoodles,” “Donut Hell,” and “Godspeed Little Doodle,” you can be assured that the entire record is just dandy.

The band’s first single, “White Wine Spritzer,” also has come with an accompanying video that is everything you wanted it to be. Check it out below.

You can purchase Howdilly Doodilly, which was released November 11, on Okilly Dokilly’s Bandcamp, and even see them on tour! Listen to the entire album below the video, and be sure to let us know what you think about this fun-loving group in the comments! Oh diddly!