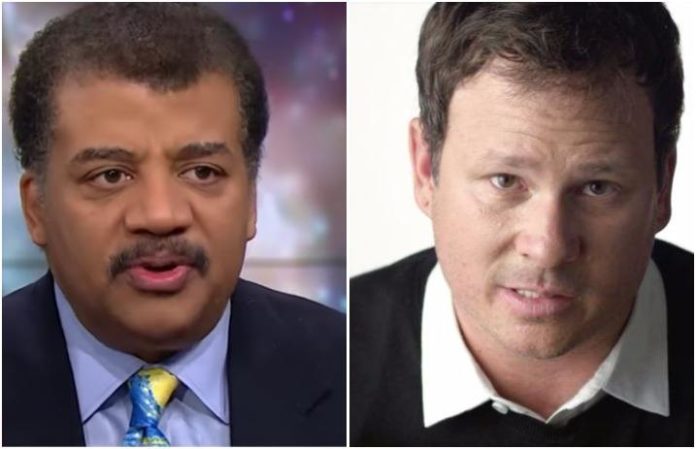 [Photos by: CNN/YouTube, To The Stars/YouTube]

Tom DeLonge may believe alien life forms are out there, and after posting two declassified U.S. military videos in an attempt to show evidence of unidentified flying objects, Neil deGrasse Tyson has shared his thoughts on the video footage—and the likelihood that there are intelligent alien life forms out there… Which he isn't really on board with.

“UFO means unidentified flying object,” deGrasse says in a new interview with CNN. “This is a highly nonspecific term. It’s so nonspecific that you don’t know what you’re looking at.”

This all began after Delonge's To The Stars Academy revealed their new partner, military intelligence officer Luis Elizondo, who oversaw the Pentagon's secret program—dubbed the Advanced Aerospace Threat Identification Program (AATIP). Elizondo stayed at the Pentagon until he resigned this past October to become Director of Global Security & Special Programs for To The Stars Academy.

According to the Academy, the footage “is a product of U.S. military sensors, which confirms it is original, unaltered and not computer generated or artificially fabricated,” and though neither video offers conclusive evidence of the existence of UFOs, both show an unidentified aerial phenomena (UAP) in the form of a “whitish oval-shaped object” moving quickly and hovering on screen.

Of course, the first thing people's minds jump to when they hear the word “UFO” is aliens. However, as deGrasse explains, it's unidentified for a reason. Is there any proof that there's an alien behind the wheel of said aircraft? Nope.

The reason why people were intrigued, of course, is because it involved the Pentagon and $22 million, deGrasse says. However, he notes that $22 million over five years really isn't that much in the Pentagon's massive budget.

Plus: “It’s a flying object, and we don’t know what it is. I would hope somebody’s checking it out. I would hope there’s a program in our defense department to make sure they do not pose a threat. And sure enough, that’s what that program was,” he says.

DeLonge has previously shared his theory that there have already been alien life form discoveries on the planet Earth. In an interview back in October, he told Joe Rogan that a life form has reportedly already been discovered. Plus, he touches on myriad other points of conjectural information regarding the government's supposed knowledge of alien life.

However, deGrasse isn't so certain.

“The evidence is so paltry for aliens to visit Earth, I have no further interest. Let other people who care, go ahead, and when you find some aliens, bring them into Times Square,” he jokes. “Everybody’s got a high-definition video camera on them now. I’m just waiting for images of people having tea with aliens on a spacecraft.”

And when asked if he thought there’s intelligent life out there, his response is actually perfect.

“I would first start with that question on Earth. So the question is: Have aliens visited and just kept going because there was no sign of intelligent life? Who defined us as intelligent? We did. So is that some cosmic measure of intelligence? Perhaps not. Who are we to say,” he says.

“It seems to me, aliens who visited us, they’d manifest more convincingly than fuzzy video. And there’s no reason to assume that because you don’t know what you’re looking at it equals aliens that visited us from outer space.”

He explains that “the program is closed now, so it’s not a threat.” So is there alien life? We're not sure.

Listen to deGrasse's interview below for yourself:

Whether there are alien life forms or not, DeLonge is still keeping busy. Earlier this year, he revealed the lead actors for his movie Strange Times, and with To The Stars just taking off, the UFO Researcher Of The Year award recipient has plenty on his plate.

What are your thoughts on DeLonge and deGrasse's two opposing theories? Sound off in the comments.