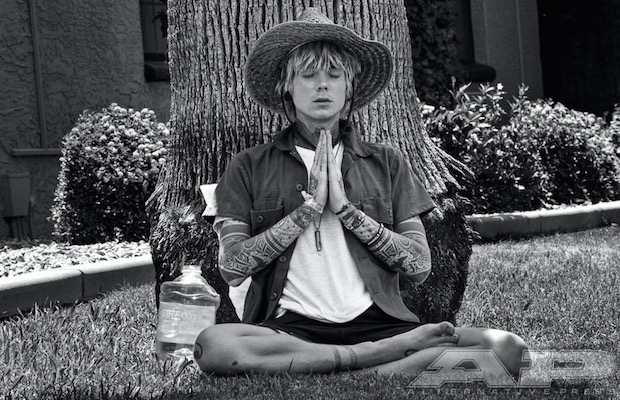 Never Shout Never have never shied away from musical experimentation, and their next album, labeled by frontman Christofer Drew as a “conceptual record,” seems to emphasize that point more. In a new interview with Live Nation TV, Never Shout Never talks about this next concept album in detail, which, from the sounds of it, is already in the works. The band hopes for the record to be done by this summer.

“We're working on a new record right now. It's a conceptual record accompanied by an animated movie,” Drew says in the interview.

“We've been in the studio for a couple of weeks and we're going to jump back in after this tour. Hopefully it'll be ready for this summer. I started writing a collection of songs that told a story of this person at a very low point in their life who goes on this long magical mystery road trip across the country, learns a bunch of lessons along the way, and eventually finds love. It's a sad-to-happy arc, and I've got the whole outline written out,” Drew continues. “The whole concept behind the album is that this person is born into Los Angeles and they trying to escape that and find real truth. I got the inspiration from a girl out there I was hanging with for a while. She had a thing about her that was kind of dark and weird and romantic. I'll never tell her it's about her, and I hope she never finds out, because now the story's been twisted.”

“We're all excited about the album, though. It's got some folky, country sounds and some psychedelic, Pink Floyd-inspired stuff,” Drew says.

“That's the fun thing about doing a record like this. You can really be more creative about how you make the peaks and valleys because you're following a story,” Never Shout Never bassist Taylor MacFee says. “If you're writing about someone running through a field on a beautiful day, we can throw in a pretty, major-key guitar line.”

“Yeah, my original idea was to direct a real movie with a super indie vibe and one camera. Then it turned into a psychedelic, old-school cartoon, which is honestly more exciting,” Drew says. “I was trying to get Bill Murray on board.”

Read more: A Day In The Life Of Never Shout Never

Never Shout Never also discusses the creative process behind their last record Black Cat from Aug. 2015, changes in the music business, and their falling out with Warner Bros. and eventual reconciliation with the label.