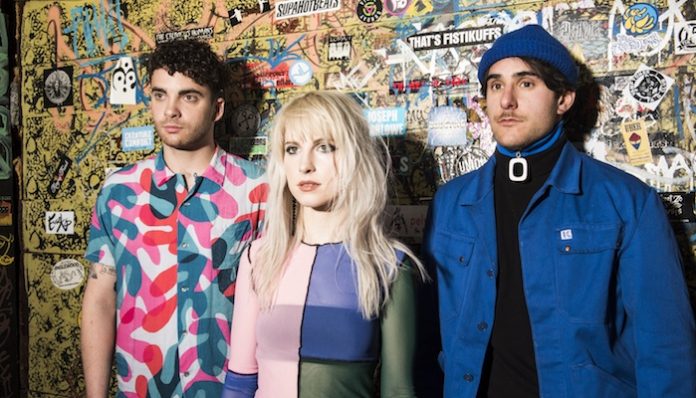 Hayley Williams just made her solo debut with Petals For Armor on May 8 and she’s already thinking about the future. The Paramore singer had recently spoken about what a new Paramore record could sound like and who would make a cool producer.

Now, it seems the band want to explore even more guitar sounds as they revisit some of the songs they listened to growing up.

Even though Hayley Williams and Paramore haven’t made a record since 2017’s After Laughter, Williams has assured fans that the group is very much still together and in her mind.

In fact, Williams recently spoke about what the album could sound like, now that both her bandmates Zac Farro and Taylor York are accomplished producers.

“We’ve talked about it for sure. We’ve talked about who might be a cool producer, because both Taylor and Zac produce now. And we’ve talked about what styles of music we might want to fuck with. It’s funny, though, because we always do this and then we get in the car and take a complete left turn. It makes me excited because we literally just follow our whims and who knows where we’ll go? I think that’s what kept Paramore going all this time.”

Now, speaking with NME, Hayley Williams spoke a bit more about Paramore’s future sound, what After Laughter represented and what the band mean to her personally.

“We’ve thought about [the next Paramore album],” Williams explains. “Taylor’s mentioned things like: ‘Oh, God, I miss guitars. We’ve found ourselves listening to a lot of older music that we grew up being inspired by. T and I liked stuff that was a bit more ratty sounding: The Rapture, Yeah Yeah Yeahs. All three of us loved Queens Of The Stone Age’s ‘Songs For The Deaf.’”

Williams also talked about how the return to a punk-ish guitar sound is definitely a turn-around from the synth-wave product After Laughter.

Read More: Do you remember the lyrics to “Ain’t It Fun” by Paramore?

“It’s a summer/winter thing,” Williams said. “When it’s winter you can’t wait to be sweating your balls off, and in the summer you’re like, ‘Fuck, I hate this!’ After making ‘After Laughter’ it’s like, ‘Okay, we’ve tried this on and it actually fits and feels great. Now let’s see what else we can do to fuck this up’. That excitement and curiosity that keeps us a band. We won’t let it happen unless we think it’s the coolest thing in the world, I mean, Paramore’s my favorite band. How dare I ever ruin it?”

Hayley Williams then reflected on her bandmates and Paramore itself.

“God, getting older is such a weird thing. It’s very nice to be able to grow up with these guys. We screwed around for a long time, and we made each other’s lives miserable for a time there, but we make each other better people. I’m pumped.”

Read More: Do you remember Hayley Williams’ hair color in these Paramore videos?

As we’re sure you know, Williams has released music with Paramore for more than 15 years, kicking things off with All We Know Is Falling in 2005. Four albums and countless accolades later, the band released their fifth LP, After Laughter, in 2017.

Paramore ended the After Laughter cycle and retired “Misery Business” in September 2018, and they haven’t played together since. Not much was said about the future of Paramore until June 2019 when they posted a muted video. Nothing transpired from it, however, and Williams did regret leaving fans to question the band’s future. They took to Instagram, sharing a year-end post reflecting on the band’s time together before clarifying it didn’t mean a breakup was in store.

With that said, we don’t know when we might get new Paramore material. We’re just glad they’re thinking about it.

Hayley Williams has clarified comments reported by NME, tweeting, “sry to disappoint but I like….. literally never said that.”

She followed up the post by sharing a playlist that she initially stated inspired the band’s beginnings, further elaborating that it includes some of the songs she was talking about during the interview.

sry to disappoint but i like…. literally never said that. pic.twitter.com/wgx9FOQJLR

and if you curious as to the music i was talking about when i said we were listening to our old faves… here’s the actual playlist i was referring to. https://t.co/9s9M8AlnFh

Following clarification on her comments to NME, Williams has further elaborated on Paramore’s sound and future plans, explaining that the band has never seen themselves as “pop-punk.”

“Summa yall bout to be real mad: We never believed we were pop-punk in the first place. We are just Paramore, so there’s nothing to return to…except for the studio when we’re ready.”

we never believed we were pop-punk in the first place. we are just paramore. so there’s nothing to return to… except for the studio, when we’re ready. https://t.co/4yNT9coGH2

Are you excited about the next Paramore album? Sound off in the comments below!