‘Punk Goes’ series takes it back to Myspace with new teaser

What year is it? The Punk Goes series is making us ask that very question.

While the Punk Goes Twitter account has kept to retweeting and interacting with fans for the past while, a throwback-inspired screenshot a few weeks ago renewed interest in the cover compilations

The popular series of albums shared a teaser on social media a few weeks ago, taking us back to the days of AIM messenger.

With little information aside from the picture, we might have a hint to at least one band who may be included in the latest compilation.

With an IM reading “YOU KNOW THE WORDS, SO SING ALONG 4 ME BABY brb,” it’s safe to assume that Mayday Parade will be on the possible Fearless Records release.

Now, the teasers are turning to MySpace nods, showing off a new friend request sent on June 28, 2019, this Friday. 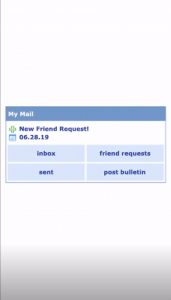 While Mayday is already teased with a line straight from “Three Cheers For Five Years,” fans will be watching intently for more bands and covers to be revealed.

The last collection dropped almost a year and a half ago in July of 2017, meaning any radio hit released between then and now is fair game.

The compilation also features a duet of Adele’s “When We Were Young” by Andy Black and Juliet Simms, who also included a stunning music video.

Will we see some returning acts on this edition, or maybe even some ex-scene players getting covers themselves (ala Paramore?) Needless to say, we can’t wait for Friday.

Who do you think is on the 2019 version of Punk Goes Pop? Sound off in the comments below!