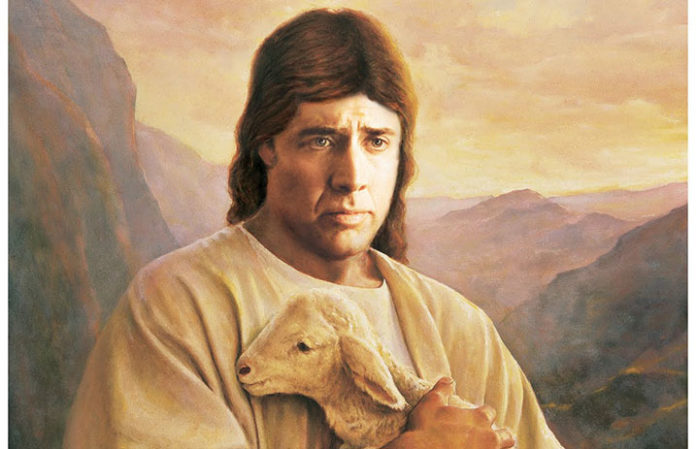 [Photo by: Nic Cage as Everyone]

Candy and snacks using the latest movie to advertise is a tradition that's been around for nearly forever, but this tie-in for the Japanese snack Umaibou with the movie Army of One has us asking why Nicolas Cage and why does he look so much like Jesus?

Check out a picture of the snack below!

Army of One stars Nicolas Cage as Gary Faulkner, who after receiving a visit from God (Russell Brand), decides to fly out to Pakistan to try and capture Osama Bin Laden. Directed by Larry Charles, who also directed Borat, the film sounds hilarious and if you buy a movie ticket for the film in Japan, you can get these special Nicolas Cage version of Umaibou.

Umaibou is a Japanese corn snack which comes in a variety of flavors, such as teriyaki burger, mentai (fish eggs pickled in chili peppers) and even salami. You can even buy a package of Umaibou off of Amazon where one reviewer writes, “If you like the puffed cheeto texture, with a buttery corn flavor, You will probably LOVE these!”

They already sound tempting to try, but once you see these special Nicolas Cage version, you're going to be dying for them. Check it out below, courtesy of @findingbinladen.

Aren't those the amazing things you've ever seen? The only thing we're wondering is why Nicolas Cage suddenly looks so much like Jesus.. Maybe we're just hungry..

Tell us what you think in the comments!