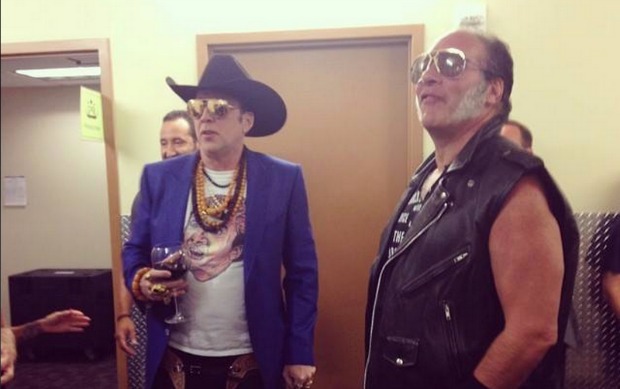 Awesome ’90s guy and current Internet meme deity Nicolas Cage showed up at a Guns N’ Roses show in Las Vegas, Nevada over the weekend. Yes, that is a Nic Cage shirt you see Nic Cage wearing. For those who missed it, Cage presented an award to Axl Rose at the Revolver Golden Gods Awards and had a mini-freak-out.

He’s also wearing a purple suit, beads and cowboy pants (and a cowboy hat) to go along with his cane and goblet. Please, Mr. Cage, hang around the music scene more often.

He also joined GNR onstage to take a bow:

Take a good look, because this is what livin on the next level looks like. WHAT A VIBE! #zerosarcasm pic.twitter.com/ETng0Z5CZy

I wish I was that kind of fearless