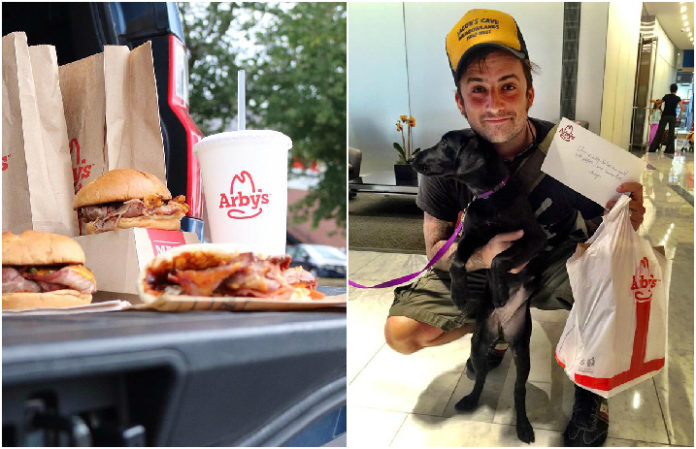 Fast food restaurant Arby's has reportedly made peace with Nihilist Arby's creator and longtime punk rock musician, Brendan Kelly, according to Business Insider. The chain even sent the prolific Twitter personality a puppy!

Twitter users may recall the ascent of popular troll account Nihilist Arby's and its endless expounding on the meaningless of life under the guise of beef and cheese. The profile frequently posts dismal tweets like this:

Wanna feel old? You were a non sentient nothing for infinite time before you were born & will soon return to that state. Enjoy Arby's.

Arby's took notice of the flippant Twitter send-up, and found out that the mastermind behind Nihilist Arby's was the aforementioned Kelly, Chicago adman and punk-band frontman, best known for his work in the Lawrence Arms, the Falcon and Brendan Kelly and the Wandering Birds.

“We had discussions around what do we do with that?” recalls Arby's CEO Paul Brown on learning the identity of the Nihilist Arby's creator. “And we said, 'Well, one, even if we wanted to do something, we couldn't.' But we also had a little fun with him, too.”

As seen in Kelly's tweet below, Arby's executives apparently flew out to meet Kelly, bringing with them a bag of Arby's food… and a puppy.

Man, @Arbys…thanks for making my day. Sincerely. I had so many things I wanted to ask you. Next time, eh? pic.twitter.com/TMwPpxpSXj

“Cheer up, buddy. You live in a world with puppies … and sandwiches,” reads the note delivered to Kelly from the Arby's team.

“It's kind of hard to have regrets about a stupid parody Twitter account about the futility of corporate Twitter,” says Kelly about meeting with the Arby's execs. “But I really would have liked to have hung out a little more with those people.”