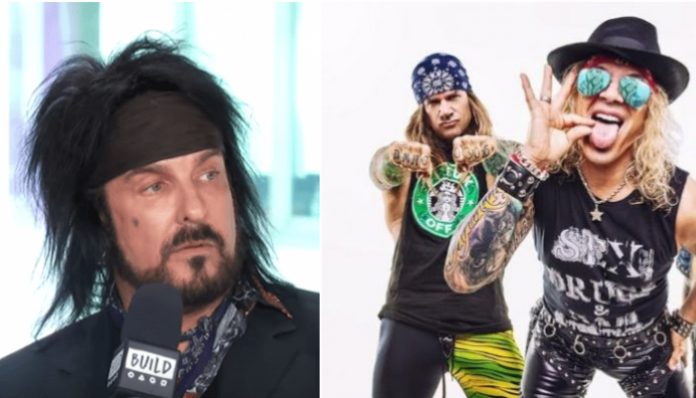 Motley Crue bassist Nikki Sixx has never been afraid to call people out over the things they say and he’s back at it again after Steel Panther vocalist Michael Starr made a dumb joke.

Starr recently appeared on Little Punk People alongside drummer Stix Zadinia and when he was asked which musician he would bring back from the dead he was firm on his response.

Read More: Bring Me The Horizon may have gotten a ‘Black Panther’ star for new video

When Starr was asked the question he hardly hesitated in saying Motley Crue vocalist Vince Neil. When Zadinia replied saying he isn’t dead, Starr followed up saying “I’d bring back the Vince Neil from back in the day, because that guy is dead.”

While fully aware of the comedic schtick Steel Panther have built themselves on, Sixx still isn’t happy about the joke. He tweeted out a response to the video and doubled down after seeing a fans defending Neil in his comments.

The singer in steal panther can go fück himself… wanna be band putting down @thevinceneil ?

That’s why they are assholes. Backstabbers.

Apparently Motley Crue have hated Steel Panther for some time though. Steel Panther guitarist Satchel told Meltdown about how the band acted standoffish with them during a 2011 tour.

“They talked to us like once the whole tour. And Tommy Lee and I, we just butted heads a lot. Because – Tommy Lee… I don’t know why he hates us so much. Listen, I extended the olive branch, I wanted to be friends with them. I think maybe Tommy Lee feels like we’re poking fun at him personally. But we’re just having fun … Someday maybe Motley Crue will be our friends but I think Tommy Lee would love it if one of us got hit by a bus. [Laughs]”

Zadinia has also responded to Sixx on his social media account, firing back at the musician.

In order to stab someone in the back, you have to have been somewhat cordial to begin with.

You can watch the entire Little Punk People interview in the player below.

What do you think of Nikki Sixx calling out Steel Panther? Let us know your thoughts below.