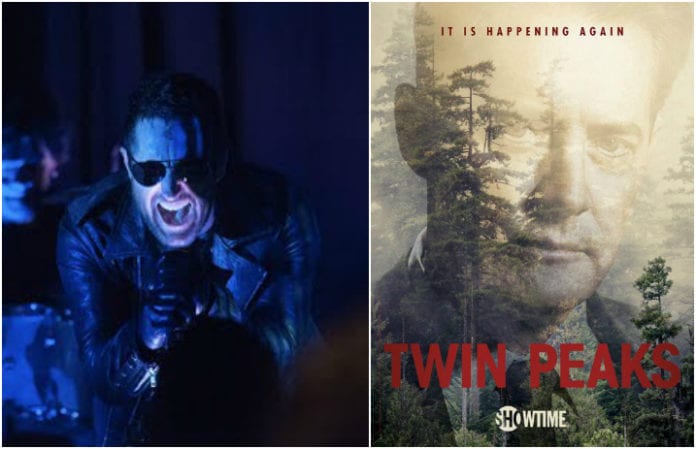 None other than Nine Inch Nails cropped up on last night's episode of Twin Peaks: The Return, performing a song from their recent Not The Actual Events EP on the surreal revival series from creators David Lynch and Mark Frost. Watch it below!

Read more: Nine Inch Nails will have a new EP out this summer, with another to follow according to Trent Reznor

Now eight shows into its strange, sprawling return to television—the original Twin Peaks ran for two seasons in the early '90s—nearly every episode of the resurrected serial drama has featured a closing musical segment from artists such as the Chromatics, the Cactus Blossoms, and Au Revoir Simone.

Trent Reznor and crew (curiously announced in the show as, “the Nine Inch Nails”) showed up on Sunday's “Part 8” performing a distortion-drenched version of Not The Actual Events number “She's Gone Away.”

This isn't the first time that Reznor and filmmaker Lynch have collaborated. As reported by AP, the Eraserhead and Mulholland Drive director helmed NIN's 2013 music video for “Came Back Haunted” (from the band's eighth album Hesitation Marks). Prior to that, Reznor worked with Lynch on the soundtrack to 1997's Lost Highway, contributing the NIN staple “The Perfect Drug.”

According to Rolling Stone, Pearl Jam's Eddie Vedder is also slated to appear on an upcoming Twin Peaks episode—he hasn't shown up quite yet.

Watch Nine Inch Nails' leather-clad Twin Peaks performance of “She's Gone Away” right here, and let us know what you think in the comments!