The latest book will give fans insight they’ve never known before.

A Nirvana manager is releasing a book about his memories with Kurt Cobain and the band that have never been heard before.

Danny Goldberg worked with Nirvana from 1990 to 1994 and he will go into detail about his experience with the band in SERVING THE SERVANT: Remembering Kurt Cobain.

The beginning of Goldberg’s career with Nirvana was before the band was even close to becoming cultural icons. He was with them when Nevermind changed the alt-rock sphere forever.

He was also there for Cobain’s relationship and marriage to Courtney Love and the birth of their daughter, Frances Bean.

The book releases on April 2, almost 25 years to the date of Cobain’s death. You can check out the cover of it below. 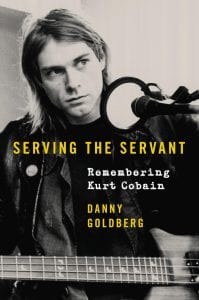 On the other end of the spectrum, we reported in December that the band was suing Marc Jacobs for ripping off their iconic smiley face design. Nirvana has owned the trademark for the design since 1992.

Black with a nearly identically drawn face on it, the Marc Jacobs shirt basically exchanges Nirvana’s dead eyed ‘X’s with an ‘M’ and a ‘J’ and calls it a day.

If that weren’t enough, the company exchanges Nirvana’s band name for the word “Heaven” in a typeface that is indistinguishable from the “Onyx” font used in the original design.

You can see the comparison images below.

Are you excited for a new Nirvana book? Sound off in the comments.