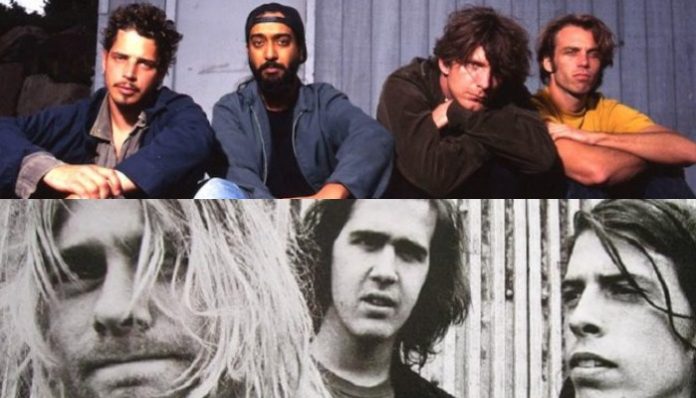 Earlier today it was brought to life that Nirvana, Soundgarden and more lost their master tapes in a fire back in 2008. Now, a couple of bands have come forward claiming they had no idea they were among the artists who had their masters destroyed.

Alternative rock band Hole, fronted by Courtney Love, revealed to Pitchfork that they were never told by Universal that their tapes were destroyed. A rep told the outlet they were “not aware until this morning.”

R.E.M. also took to Twitter to reveal they were looking into the matter.

“REMHQ is receiving inquiries from many people concerned about the New York Times article on the Universal Music fire 11 years ago. We are trying to get good information to find out what happened and the effect on the band’s music, if any. We will detail further as and when.”

REMHQ is receiving inquiries from many people concerned about the New York Times article on the Universal Music fire 11 years ago. We are trying to get good information to find out what happened and the effect on the band’s music, if any. We will detail further as and when.

A New York Times investigation reveals that the masters by Universal artists throughout the decades were lost, which limits the possibilities for high-quality reproductions in the future.

At the time of the fire, most of the coverage focused on the burned King Kong theme park attraction and video content, and dismissed the lost music.

The new report suggests that the lost masters were kept under wraps for fear that artists and estates whose masters were destroyed would come after the label.

Other notable loses include “almost all” of Buddy Holly’s masters as well as loses from names like Elton John, No Doubt, R.E.M. Iggy Pop and dozens more.

UMG has since disputed the claims and put out a statement via Variety about the fire.

“Music preservation is of the highest priority for us and we are proud of our track record,” the statement reads in part. “While there are constraints preventing us from publicly addressing some of the details of the fire that occurred at NBCUniversal Studios facility more than a decade ago, the incident – while deeply unfortunate – never affected the availability of the commercially released music nor impacted artists’ compensation.”

The statement goes on to cite “the tens of thousands of back catalog recordings that we have already issued in recent years – including master-quality, high-resolution, audiophile versions of many recordings that the story claims were ‘destroyed,’” and says “UMG invests more in music preservation and development of hi-resolution audio products than anyone else in music.”

Speaking of Nirvana, one Nirvana fan just bought a used paper plate that frontman Kurt Cobain ate pizza off of once for $22,000.

The sale took place at an auction put on by Julien’s Auctions, who put on their “MUSIC Icons” event on Saturday in Times Square.

Besides the sweater, items owned by Queen, Madonna, Prince, Lady Gaga, Beyonce and more were auctions.

Another item sold was a cardigan worn by Cobain during his final photo shoot. It just sold for $75,000 at an auction.

Cobain’s sweater sold for way over its initial estimate of $20,000. He wore it for the album cover of In Utero which was released in September 1993.

SOLD for $75,000! A cardigan worn by #KurtCobain in his last photoshoot with #Nirvana taken in the summer of 1993 with photographer Jesse Frohman. SOLD TODAY in our “Music Icons” #memorabilia #auction @HardRockCafeNYC and online at https://t.co/TiME89MqlX! https://t.co/ahsXX3qbxg pic.twitter.com/mZmHg7wtig

As for the Queen stuff auction off, the group’s synthesizer that was used to record “Radio Ga Ga” sold for $25,000 after being estimated at $8,000. Also, a shirt that was signed and worn by Freddie Mercury in his last filmed performance in the 1991 single “These Are The Days of Our Lives” sold for $54,400.

You can see the shirt below in the video.

Some other impressive sells were Britney Spears’ handwritten lyrics to “Baby One More Time” sold for more than $10,000. Also, a military-style jacket worn by Michael Jackson that he wore to the birthday party for President Nelson Mandela sold for $76,800.

What do you think of the lost UMG music? Sound off in the comments down below!