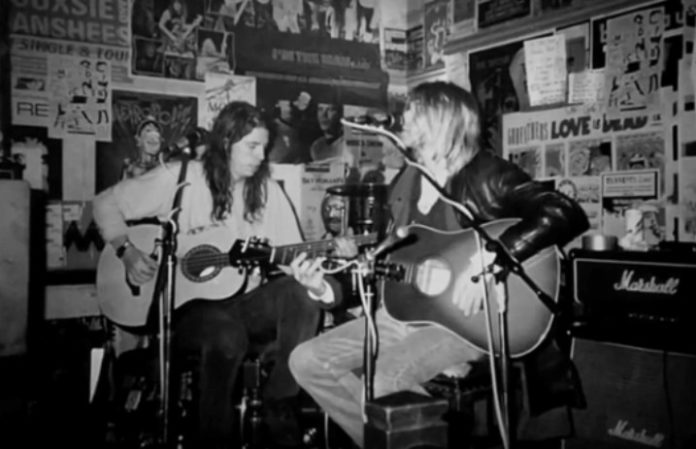 26 years ago, Kurt Cobain and Dave Grohl played a small Nirvana acoustic set to a handful of people in Edinburgh, Scotland on Dec. 1, 1991 to raise money for charity. Everyone thought a recording of show didn't exist—but it has finally been unearthed.

The gig poster detailed that the bar would be presenting the Joyriders plus “very special guests.” Nirvana were #9 in the UK charts at the time with Smells Like Teen Spirit. The show began at 7pm with a £1 donation on the door for the city's Sick Kids Hospital.

Cobain and Grohl played a five-song set to around 30 people under the pseudonym “Teen Spirit”. The acoustic tracks that can be heard in the recording include “Dumb,” “Polly” and a cover of the Vaselines' “Jesus Don't Want Me For A Sunbeam.” According to Rolling Stone, the duo also covered “Twist Barbie” by Shonen Knife, who were Nirvana's opening act on that European tour.

Decades after the show, a recording of the set has finally surfaced after nearly 15 years of active searching.

26 years ago today #Nirvana played an acoustic date in Edinburgh. We've been actively trying to track down a recording for probably 15 years. We thought one didn't exist. It does. Thanks to all involved. https://t.co/mXVNdb2q5d pic.twitter.com/0etCMMtidd

The two and a half songs played in the recording below are thought to be the only tapes of the performance. They have been made available to mark the 26th anniversary of the set.

Listen to the recording here:

Nirvana played a full concert at Edinburgh's Calton Studios two nights before the acoustic gig. Check it out below: