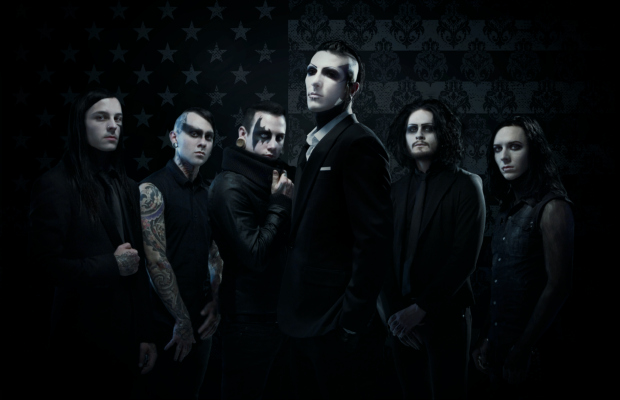 Motionless In White frontman Chris Motionless recently went on a pretty lengthy rant in a post on his personal blog. The singer expressed his frustrations on a number of issues from the insincere culture of music to “inspirational” bands and clothing lines.

You can read the full post from Chris Motionless below:

As usual, I say something in an interview and of course fans have a problem with it. I don’t know why i continuously feel like I should have to defend myself, but because no one is able read between the lines to understand why I said what i said.. I can’t help but want to try and encourage people to use their brains for something other than typical tumblr nonsense.

Yes. Myself and the band as an entity have decided to stop the preaching. If you’ve been to any shows of ours since I think Warped Tour of 2012, you will notice that I put an end to the speeches and on stage rants, I don’t post anything people may find inspirational and I have completely stepped away from social networking on a regular basis. This has been an occurrence that has taken place for over a year, so why only now that I brought it to peoples attention in an interview are they whining about it? When are people finally going to get it through their heads that MIW is not the same band it was when Creatures came out?

Why did I say that in the interview? *cracks knuckles* *takes deep breath*

#1. 8 out of 10 bands, clothing lines and public figures around now are on the “inspirational message” train. I’ve been watching it grow for the past few years. I can’t see a band anymore without hearing the same regurgitated and hollow words come from their mouths. I haven’t seen a clothing line released lately without the accompanying message in any variation the company decides to convey it. Do people not realize that they are being scammed? Are people too stupid to see that the “message” is a money making failsafe plan? These bands and companies realize that people are responding heavily to the “message” thing and many of them have no problem using that to their advantage. I’m not saying in any way that we were the first band to claim any sort of message.. fuck no we weren’t. But I can assure you that I never spoke a word I didn’t mean in an effort to take your money. You can see how us carrying on as a band but not wanting to prey on the willingness of said money spender would demonstrate the sincerity of where we’re at as a band now. It’s bullshit and I want no part in it any more. It’s that simple. I’m going to write the lyrics I write because thats how I feel and thats how it’s always been. I’m not your life coach and my lyrics aren’t supposed to be a guideline as to how you should live your life. I’ve said that before. IF people want to find hope or inspiration from them then hey, thats amazing and i’m incredibly honored, but i’m not writing them for you, I’m writing them for me. It’s all on you as to what you take from them and how you allow it to help you.

#2. This “you saved my life”, “you’re my hero” and “you’re my voice” thing has become an unbearable burden and a downright eye roller. NO. I did not save your life. NO.. band X, Y or Z did not save your life. IF in fact you were on the brink of any self harming action… it was YOU who pulled yourself from the ledge. You saved your life, You are the hero. Why are people not willing to take credit for their own actions? Thats right… because thats what fans think bands want to hear. I’m not taking ANYTHING away from people who do self harm or have a hard time with any aspects of their lives. We’ve all been there and having gone through those things myself shaped who I am today and made me want to use music as an outlet. I do agree that music can be a very helpful tool in helping you overcome whatever is ailing you, but in the end it’s only you who had the strength to pull yourself out of it. I am strictly speaking out against the many many people i’ve seen approach me in the most absolute insincere, dishonest fashion with the “you guys saved my life” lines. I wish I had video of it so you can get the full effect. I can see right through it. It’s as though that has become the new “hello” when approaching a band member. What happened to “hey man, great show”, or “Hey guys, I really like your record/song”? Why does fucking EVERYTHING have to be laced with the “omg like you totally saved my life, and my friends life and her cats life” or the “you’re a huge inspiration, you’re my hero”? Can someone please tell me how the FUCK these bands who write lyrics about getting wasted or degrading women have saved your life? Seriously? It’s giving the people who really do deal with this stuff a bad name. Not to mention that on many occasions, I’ve seen people tweet things at me, then i’ll go to their twitter page only to see that they literally copy and pasted the same words to 15 other band members with only the intention of getting a response from one of us so they can screen shot it and brag about it. Disgusting. And you wonder why I just want to just simply write/play music and get the fuck out of that world of things??

#3. The hypocrisy amongst the very same fans who are upset with me is just embarrassing. I see fans every day tweet at me and say that I’ve helped them, but then will see that same person rip someone else apart over their opinion of something, the bands they like or a certain musician they like etc… Just go to a bands youtube page and read the comments on one of their music videos. Or better yet, go to my instagram and read the daily wars that happen between comments on my photos of things completely irrelevant to what they are arguing over. Seriously, I can post a photo of something like a cool piece of architecture I came across on tour and somehow @Andrew_bring_me_the_memphis_sirens_to_remember and @JulieMotionless_may_fire_the_horizon_bloodysuicide will end up tearing each other to shreds over Ronnie Radkes recent haircut. It’s sickening that people who claim that music has helped them and gave them any sort of values and morals to live by treat others with such disrespect. You’re full of shit.

Looking back on everything I’ve ever said makes me realize that underneath it all, MIW’s main message has always been about not giving a fuck what people thought and encouraging you to do the same. We stopped with the preaching and pushing. We changed our style of music to sound like how we wanted to sound without fear of losing fans. We’ve maintained our image regardless of criticism. We are pulling back from the shit like putting “fuck” or “666” or fucking upside-down crosses on shirts just to sell merch because those are the only shirts kids fucking buy anymore. We are doing whatever the fuck we want and if that means our time has come where our band isn’t welcome anymore, then I feel sorry for you that you chose to support the opposition and for pushing out a band that now solely cares about what music, at it’s core, should always be about… giving people their money’s worth with the music/lyrics and live show. 90% of the people that are pissed at me and that i am referring to in this blog (based off of the comments I’ve read) are younger kids. I am an adult and we see things very differently. I’m not looking to spend the rest of my career on the playground. It’s not that I don’t care, its that I do care. Thats the problem.”