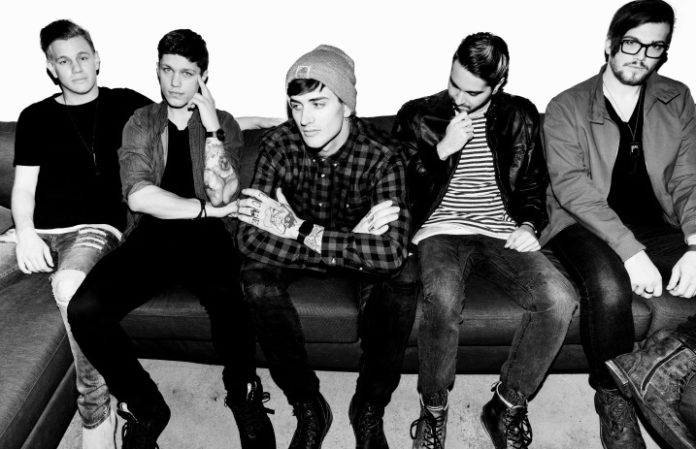 Noble, featuring members of Confide, Attack Attack!, In Fear And Faith, At The Skylines and Oh Sleeper, are premiering a music video for their debut single, “Deadset.”

The band, which formed a little over a year ago, have been in the studio recording for a few months now and have a few songs ready for release.

For now, give a listen to “Deadset,” and read our Q&A with Mark Barelaii (At The Skylines), who talks more about their new project and what new music we have to look forward to.

And read our Q&A with Barelaii below:

Talk to us a little bit about Noble. When and how did this new band form? What’s the story?
The band formed slightly over a year ago. Its actually a interesting story. All of us knew each other and had crossed paths a few times in our previous bands. Our guitarist Jeff (Confide) had been working on some material for a bit not entirely sure what was going to come of it. He lived close to Sean Bell our other guitarist (Attack Attack, INFAF) and they have shared guitar equipment with each other for shows and have been gear nerds together since they first met. Jeff went to record at Joel pipers studio in SD and had told Sean about it and borrowed some stuff from him. After he got back and sean heard the first 3 songs his first response was “So are we doing this together haha”. Sean then showed the music to Scott and from there Scott said he wanted to play bass and sing rather than be a front man again so he could change things up. After searching for a while and trying to find the right people for the frontman and drummer positions Jeff contacted mark Barella (at the skylines) whom had just moved back to southern California from the bay area. Mark quickly went to a studio and tracked some vocals and was exactly what the band was looking for. Mark then contacted Zac (Oh sleeper) and he was in. Weve been in the studio recording for a few months now and have some awesome songs that we are all excited to release.

How did the band name come about? Why did you decide on that?
We were actually bouncing around a few names at the time and we wanted a strong one or two word name for the band that wouldn’t necessarily prohibit us in any way. Like names Dying Fetus and Cannibal corpse. Both amazing bands and great people but without hearing the music you can assume they are fairly heavy artists. So we bounced around a few and had some ideas going but a few weeks ago when we put together a little teaser and released it on all our current and former bands social media without saying anything it picked up a lot of steam and speculation. Some people on Reddit had actually started a thread and pieced the whole thing together with all the members in it and one of the comments on the thread said “This band is made up of Metal Nobility” and that’s how the name Noble came about.

About the song “Deadset”: Why did you choose this particular song as your ‘coming out’/as your first single as a new band?
We feel like it represents what we are going for best sound wise as a band. I wouldn’t say its our best song we have but its definitely right in the middle of the metal spectrum that we want to go for. We have songs heavier and softer than Deadset but we felt like that song overall gave the best idea of what we are going to sound like on future releases.

What projects are you currently excited about?
Noble in general! The amount of positive feedback we’ve received from just a few small clips has been great and we couldn’t be more excited to get this out there. We’ve also had a lot of guest appearances on a good amount of songs from vocalists many people will be familiar with. We have a couple things in the works at the moment as far as shows and releases planned for the near future. We will be following this first video up with a second one rather quickly though.

Will you have an EP or full-length coming out soon? If so, what can you tell us about it? If not, why not?
We have a good amount of material done and ready to go but we are not sure as to whether it will be an EP or full length. If we decide to sign to a label we will most likely do a full length but at the same time we also want to explore the option of self release and doing a six song or so EP and releasing music for free possibly. Its all kind of up in the air at the moment but whatever direction we decide to take expect to hear more material and some shows announced very soon!

What are your thoughts on “Deadset”? Let us know in the comments below!