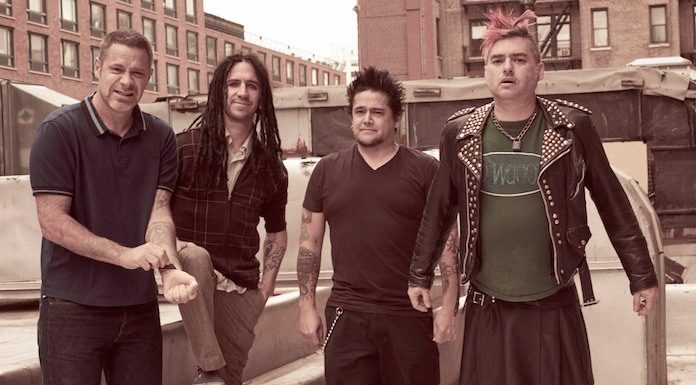 NOFX will not be appearing at this weekend’s Camp Punk In Drublic. The veteran punkers’ headlining spot has been canceled.

The news comes amid backlash facing the group. And it’s all due to some shockingly insensitive remarks the band made onstage last weekend.

NOFX members Fat Mike and Eric Melvin reportedly made a joke about the victims of the 2017 Las Vegas shooting. These comments appeared as onstage banter while the band was performing at the Punk Rock Bowling & Music Festival.

NOFX are now being replaced on the bill with Descendents. Revealed today by Punk In Drublic’s organizers, the Fat Mike-featuring Me First And The Gimme Gimmes are also being removed from the festival roster. (They’re being replaced with the Vandals.)

The statement continues. “The festival producers support fans of all music genres and take safety very seriously at all of their events.” […] “Out of respect for Route 91 Harvest Festival victims and their families, Camp Punk In Drublic will make a donation to a fund benefitting those affected by the 2017 tragedy.”

Punk In Drublic fest takes its name from the band’s 1994 fifth album. (As NOFX fans know!) The album contains classic NOFX songs such as “Linoleum” and “The Brews.”

What NOFX said about the Las Vegas shooting

Fat Mike and his bandmate compared victims of the tragic Vegas mass shooting to punk music listeners. Mike reportedly said of the victims: “At least they were country fans.” (Footage of the incident comes from TMZ.)

It happened between songs during the band’s festival performance. Fat Mike announced, “We played a song about Muslims and we didn’t get shot. Hooray.” Another NOFX member then chimed in. “I guess you only get shot in Vegas if you are in a country band,” he said.

“That [the massacre] sucked,” Mike continued. “But at least they were country fans and no punk rock fans.” The NOFX frontman didn’t stop there. “You were all thinking it,” he added.

Fat Mike and the band have visibly drawn widespread criticism from the punk and alternative communities following the news of the rude onstage comments.

The band have now also lost a beer sponsorship deal with Stone Brewing Co., as noted by Pitchfork. “We are severing all our ties with NOFX,” the beer company said.

Watch a video of the incident in question below, via TMZ:

Are you a NOFX fan? What’s up with Fat Mike and the band’s offensive onstage talk? Were you planning on attending Camp Punk In Drublic this weekend?