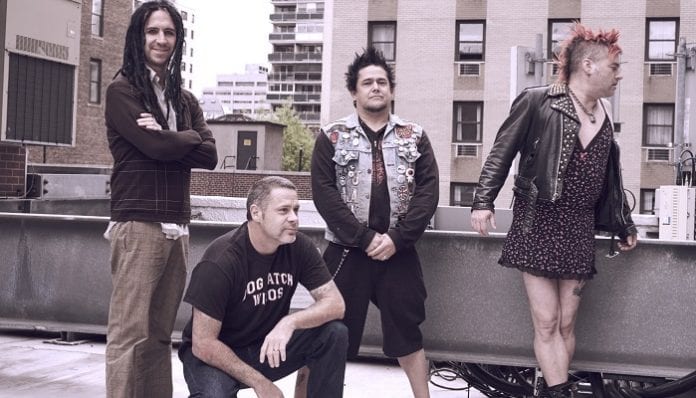 Fat Mike now has a line of panties and dresses for men, and people are apparently all for it.

Fat Mike’s love for wearing dresses is pretty well-documented in the band’s shows, videos, photos, and more. Now, he’s turning his interest into a business.

According to its website, Fatale Design has “panties and dresses specifically designed for regular dudes that just wanna be able to dress how they want to.”

The NOFX frontman shared a statement about finding out he likes wearing women’s clothes and how he came up with the idea for the brand.

“I was 8 years old in Los Angeles when I saw the Rocky Horror Picture Show on the Z channel,” he writes. “I was mesmerized.”

“Short story shorter, Stole my friends mom’s panties, secretly wore them, started cross dressing with my girlfriend in college (we were the same size! Even shoes!), got married to a woman who bought high heels for me and panties and even a latex maids uniform,” Fat Mike continues.

Now, he wants other men who feel like him to be able to be comfortable and punk, as well, with a line of panties and dresses. Despite its focus on men, the clothes are unisex.

The brand launched yesterday and it sold over 200 pairs of panties in the first five hours. We guess people are really into it.

Fat Mike shared the information in an Instagram post, also noting that shoppers only grabbed four dresses and one hoodie.

“Come on, it’s winter! You can’t go out with just panties!” He pleas.

First 5 hours! Sold over 200 pairs of panties!….. but only 4 dresses and one hoodie… Come on, it’s winter! You can’t go out with just panties! #Panties>Hoodies #Gartersarekindacooltoo @fataledesign #Thankyouallforyoursupport