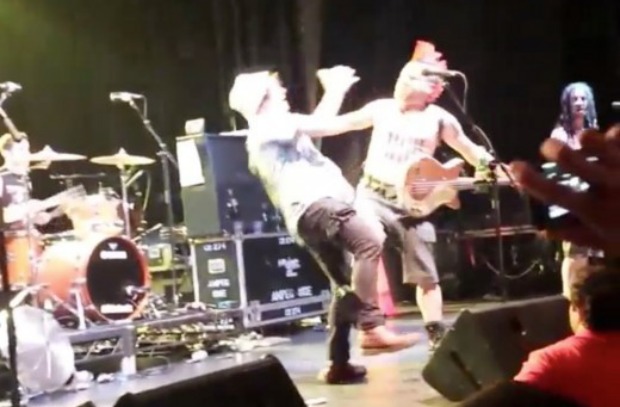 At a recent NOFX show in Sydney, Australia, a fan decided to climb onstage and put his arm around Fat Mike. In the video below, Fat Mike then proceedes to absolutely kick the living shit out of him—hitting him in the face and kicking him in the head—before security escorts the stunned fan offstage.

Moral of the story: Don’t touch Fat Mike. Check out video of the incident below, and let us know your thoughts.

Fat Mike eventually made up with the fan—who showed off his busted lip—on Twitter.

I'm sorry too Alex, I was in terrible pain all night. When you grabbed me by the neck I defensively reacted… offensively @alexanderpeterq

Alex, if you go to the show on friday I'll buy you a beer. Just don't throw it at me alright?

@lemonlawpunk @FatMike_of_NOFX not a fake account, heres photo of my swollen lip and in what i wore pic.twitter.com/3BYarBSC7P

@FatMike_of_NOFX thanks for the KO mike, didn't hurt too much. Soz for creepin up on you like, punk shows are a bit different down here.