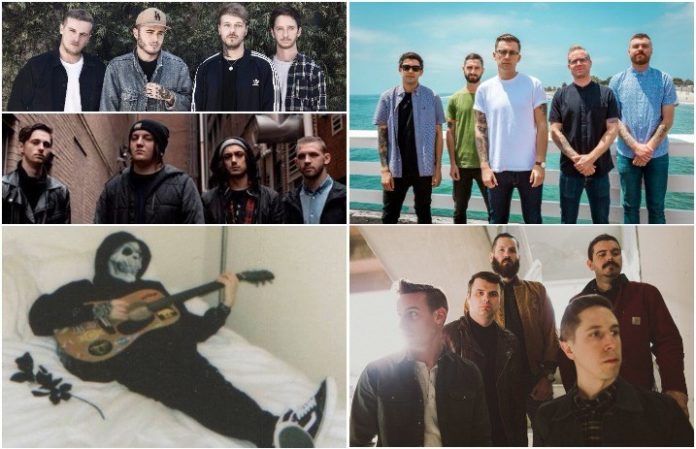 Watch new music videos from Exit Wounds and nothing,nowhere.—plus, don’t miss Silverstein, Seaway and more on tour. Check out the news you might have missed today below!

Read more: This Netflix movie might be the most terrifying film of all time

nothing,nowhere. has shared a new music video for “Hammer.” The song is taken off his upcoming album Ruiner, set to be released April 13. You can preorder your copy here!

Black Foxxes released their newest song “Joy.” The track is taken from the band’s sophomore album Reiði, set to be released March 16. You can get your copy of the album here!

3. Rise Against, NOFX and more have been announced for the Punk Rock Bowling and Music Festival

The official lineup for the 20th Punk Rock Bowling and Music Festival has been announced. Some pretty major acts will be gracing the stage, including Rise Against, NOFX, Against Me! and more! The festival will take place May 25 to 28 in downtown Vegas. Tickets for the festival will officially go on sale March 3, and you can get your tickets here!

Kid Picked Last have shared their new song “Meant For More.” The song is taken from the band’s upcoming EP, Meant For More. You can preorder it here!

Silverstein are planning two very special gigs in Hawaii May 10 and 11. Tickets will be going on sale this Monday, March 5. You can get your tickets here!

Springfield + Omaha! We are coming your way in April!

Seaway announced today that they are planning on doing a couple of one-off shows in April. The band will also be heading out on tour with Sum 41 a week later, and for a full list of dates and to purchase tickets, you can go here!

7. Vesta Collide shared a music video for their song “The Lights”

Vesta Collide have shared a fiery, new music video for their song “The Lights.” The track is taken from the band’s latest album New Obsession, and you can snag your copy here!

���� See you on the East Coast for 3 exclusive in-store performances and signings. Purchase an album in-store starting on 3/9 for access to the event. pic.twitter.com/y1hEEblXgQ

Moose Blood will be doing a few acoustic in-store performances and signings. In order to get access to the events, fans will have to purchase a copy of their new album, I Don’t Think I Can Do This Anymore. The album is set to be released March 9, and you can get your copy here!

9. Emo Nite LA will be bringing the event to the U.K.

hello m8s – we’re very excited to announce that we’re bringing emo nite to the UK! join us for the official @SlamDunkMusic pre-party on may 25th. get tix: https://t.co/k6OoD5qBxz pic.twitter.com/3GmXJbtXSU

Emo Nite LA is officially making its way to the U.K.! The super-popular event will be throwing the Slam Dunk Festival South Pre-Party at O2 Islington Academy. For tickets, you can go here!

Cut Chemist released his first solo album since 2006 called Die Cut, and you can get your copy of the album here!

11. The Second After announced a tour

We're hitting the west coast with @thehometeamnw and @bleacherdays in April! FINALLY, tour is coming around again! pic.twitter.com/wnMOUKFctK

The Second After have announced a tour! The band will be hitting the road on a West Coast tour with Bleacher Days and the Home Team.

Indianapolis, Indiana’s own Exit Wounds (formerly Vices To Veils) have shared a new music video for their song “Choices.” The band will be hitting the road with American Grim and Ovtlier. Check out the dates below!