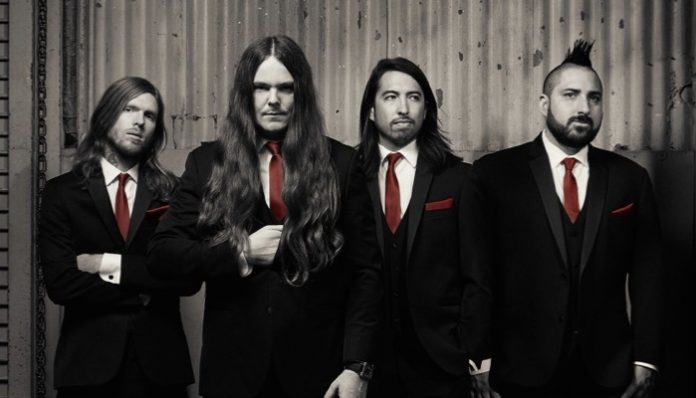 Of Mice & Men kicked off 2018 with their fifth full-length Defy. Now, the metalcore act are winding down 2019 with another riff-fueled release in followup EARTHANDSKY.

The band first shared news of a new album being in production about a year ago with producer Josh Wilbur (Trivium, Lamb Of God, Gojira). Shortly after the announcement they were joining Beartooh’s Disease Tour Part II in January, the first hint of music made its way online.

Of Mice & Men launched a toxic waste symbol-adorned site coupled with a cryptic countdown to midnight. Presumably for a new song, eagle-eyed listeners navigated around the countdown to a maze of questions. If fans made it through the quiz, they were redirected to the private YouTube link for “How To Survive” ahead of its scheduled release. The track marked the first of a return to form for the band who were once again embracing their heavy roots.

A few months later, the band canceled a string of dates with Beartooth due to a “medical situation that required immediate urgent attention.” Prior to the support dates, Of Mice & Men announced a single show cancelation in March after frontman Aaron Pauley went to the hospital for a bit of testing. The vocalist later revealed the cause of the surgery was to remove precancerous tissue. That said, Pauley’s condition was not cancerous, but more of a cautionary measure to ensure a healthy future. Joining Beartooth on the road a few weeks later, the band offered up their next single, “Mushroom Cloud.”

Read more: Of Mice & Men have no boundaries for heaviness on ‘EARTHANDSKY’—interview

“I was pretty young when I became aware of the danger of spending too much time in my own head,” Pauley said of the release. “My mind has never been a safe place for me to retreat to, and it’s something I have to consciously deal with on a daily basis. ‘Mushroom Cloud’ is our visceral representation of how it feels to be trapped, how it feels to be cut down by your own inner voice, how it feels to have nowhere to hide and how it feels to be someone with a mind that’s as dangerous to themselves as the aftermath of an atomic weapon.”

While not on EARTHANDSKY, Of Mice & Men teamed up with Kayzo and YULTRON for an EDM-rock crossover “Night Terror” amid their official singles. The collab marked a further ascension into scene territory for both producers who have worked with everyone from Kellin Quinn to Underoath respectively.

The band finally announced their album in late July with the self-titled single, “Earth & Sky” and revealed headlining tour dates soon after. Earlier this month, Of Mice & Men completed their pre-album releases with the old school thriller-inspired video for “Taste Of Regret.”

Check out the full stream of their sixth full-length EARTHANDSKY below.

The latest from Of Mice & Men, EARTHANDSKY, is available now via Rise Records here. Check out the full tracklisting below.

The band are currently on the road for a headlining tour with support from For The Fallen Dreams, Thousand Below and Bloodbather. Of Mice & Men also have a handful of additional shows with Sum 41 and the Plot In You as well as collaborators Kayzo and YULTRON. Check out a full list of remaining dates below with tickets here.