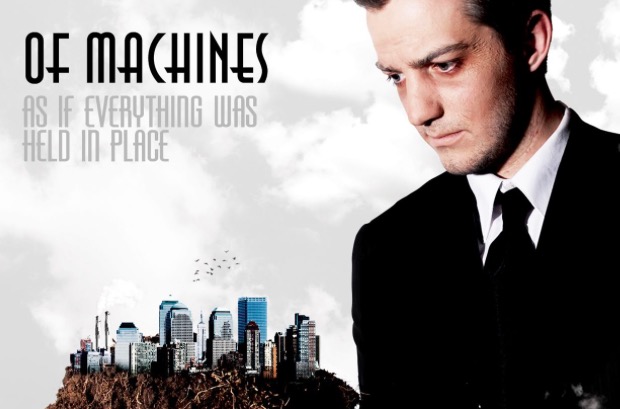 After an extended period of silence and uncertainty, Of Machines have updated fans on the current state of what was supposed to be their final EP. In short, the band's vocalist Dylan Anderson has gone missing, along with the money the band crowdfunded for the effort. Additionally, the group claim to have no access to the PayPal account they used to culminate the donations with, as it is under Anderson's name. You can read a full statement from the group below.

In light of the controversy, Of Machines have posted two demos from the final release on PureVolume, encouraging those who want to add vocals to do so.

With a heavy heart.. it doesn't seem like the chroma season ep is going to happen… After months of trying to contact Dylan he, unfortunately, is MIA. Music has been written, but without a vocalist this ep doesn't seem possible.

Thank you to everyone who believed in us so much enough to give us a second chance to record. We really wish we were able to provide you with more.

As far as refunds please contact Dylan Anderson, we hope he will do the right thing and refund everyone their money they donated. If anyone else in the band had access to any of the pay pal accounts refunds would have already be given. But unfortunately the donation account was under his name.

Thank you everyone for your support. you all are the best people we have ever had to believe in us.

We love you all.

If anyone would like we could release our demos with out vocals and all of you could finish our ep with us.

UPDATE: Anderson has responded with his own message:

“In light of all the accusations, skepticism, and straight up back handedness, I was in infuriated and extremely upset. I've had some time to think about what I wanted to say and I still can't put into words how I feel. So instead of maliciously verbally attacking opposed company, I want to shed some light without coming off too personal or too ambiguous about the matter at hand. I'm not MIA. I've been in contact with several people including isolated messages and threats to myself and the band alike. It leaves me with a significant amount of displeasure to know that the EP never came to fruition and that the people who DONATED (and I will clear this definition in Layman's terms later in this message) to the cause of this EP. I've been readily available throughout this whole process and have been one if not the most content provider of the writing process along with Bennett. Most of the demoing and songs that were put on YouTube were written by myself. To address the quality of the said material, it's not the greatest of releases we have done juxtaposed to our debut album, I understand but what you have to understand is that the money that was put forth towards the EP was minimal in comparison to most high quality studios (which was to include: documented video, PR, physical copies and digital distribution) and though the amount donated was very appreciated, it wasn't something we could exactly work with to give everyone a quality product. The fact of the matter is that I was still trying to give everyone a nostalgic and from the heart EP DIY style. Schedules and personalities unfortunately made it difficult to work as a team like the old days. It was difficult then and almost impossible now. Now to discuss refunds since some of you can't grasp the concept of this whole matter, I'll give you anecdote: A good Samaritan donates to a cause he believes in and cherishes deeply. Let's say in this melodramatic hypothetical situation that he is giving to cure cancer, so you can appreciate it's validity. He donates in hopes of it's future and not his reward. This wasn't Kickstarter, Indie-go-go or any crowd funding type of scenario. It was a DONATION. One that I tried very hard to to see actually happen but it fell short. Now I know that even within this lengthy discussion I haven't covered everything and I don't feel the need to. Things didn't go as planned. I'm sure I can speak for everyone in the band that we deeply apologize about this but we must drop the matter. I'm done with the slander, assuming and discrediting of my name. Most of you have never met me or know anything about my life nor do I want to know yours. I hope that this as at least aided some of questions and concerns of the recent events. Thank you.”