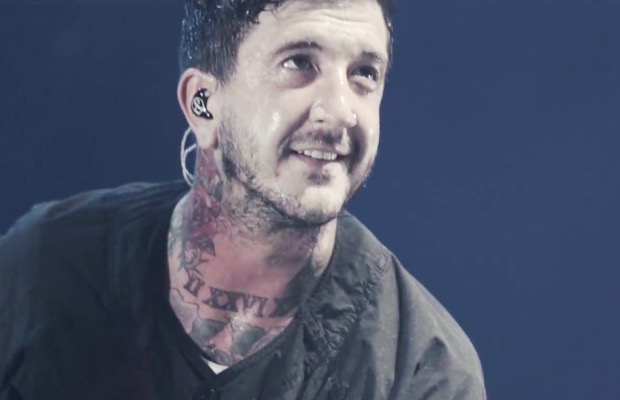 Of Mice & Men frontman Austin Carlile has never shied away from telling fans and supporters about the status of his health—that continued on Oct. 21 when he shared a new update on Twitter.

See the tweets, in which Carlile talks about multiple surgeries, below. Of Mice & Men recently canceled the rest of their European tour, so Carlile could focus on his health.

Carlile explained some of the procedures:

First of a few surgeries today!!! Will be doing something called blood patching, to fix the three major tears currently in my spine…

First procedure was able to fix one of the tears in my mid-spine caused by a bludgeoned disc tearing through the dural encasing it, now I'm

waiting for it to heal the see the results & move on to fixing the other tears in my low spine & base of neck/head Monday or Tuesday. More

recovery & resting plus A LOT of sleeping. God has a purpose for me in this & I will fight through it with Him no matter how long it takes.

Aside from my heart surgery 5 years ago, I've never had to endure something this gnarly. Thank you to all of you for the immense support <3

Carlile obviously isn't fighting this alone either, as was found out through his Instagram posts. Both Linkin Park and DC Comics have sent Carlile gifts during his hospital stay. Check out the posts below:

Speechless! Jill, Paul, & everyone else at @dccomics @dccomicsunited THANK YOU!!! You know me so well… The hero's YOU ALL created, help create who I am today. So really, thank you. Can't wait to work together again in the future! /// “Life is locomotion. If you’re not moving you’re not living. But there comes a time when you’ve got to stop running AWAY from things and you’ve got to start running TOWARDS something. You’ve got to forge ahead. Keep moving. Even if your path isn’t lit TRUST THAT YOU'LL FIND YOUR WAY.” /// x

THANK YOU @linkinpark!!! Some hospital essential reading, day four being in here already!

And, of course, fans have supported Carlile immensely through his tough decision to cancel a tour, sending him tweets of support:

@austincarlile All love with you, mate. Must be very frustrating. We're all rooting for you

@austincarlile i believe in you man. truly an inspiration from one musician to another for the sacrifices you make. sending all the love :heart:

@austincarlile I love you so much and i hope you get better soon
Stay strong, friend
#GetWellAustinCarlile

@austincarlile we all understand, your health is more important than a show, seriously. take all the time you need, we will wait for you<3

@austincarlile get well soon Austin and I will always be there for you :heart: pic.twitter.com/w2un0INGdH

Also, Carlile got to watch his Chicago Cubs make it to the World Series on Oct. 22 for the first time in over seventy years: