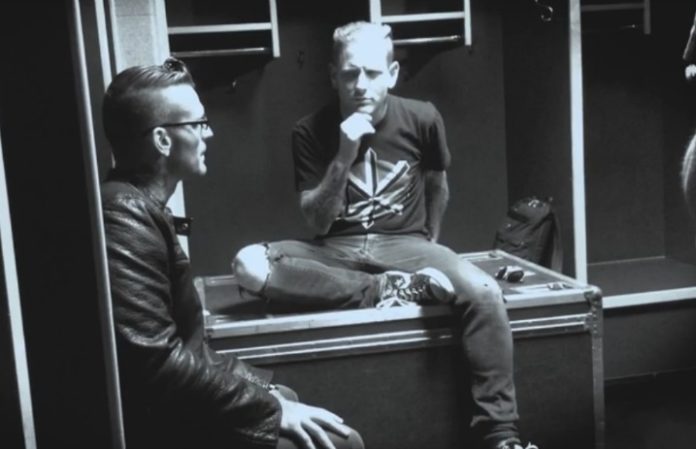 Alternative Press was honored to have not one, but two of its favorite Coreys at the 2nd annual APMAs this past July. We’re not talking about Haim and Feldman here folks; we’re talking about the legendary Slipknot/Stone Sour frontman Corey Taylor and the voice of WWE’s NXT, Corey Graves. Each were at the APMAs for a special role. Taylor was tapped to present Rob Zombie with the coveted Vanguard Award and then wowed the crowd by reemerging onstage later that night to perform alongside Halestorm, for a scene-stealing rendition of the grunge anthem “Hunger Strike.” Graves, on the other hand, was there representing the NXT, filming his hit WWE Network show “Culture Shock.” Graves would also emerge later to close out the festivities by presenting the Black Veil Brides with their Album of the Year trophies.

Here is where it got interesting. Until now, we didn’t realize that backstage during the APMAs, a verbal battle of who was truly going to headline the upcoming Aftershock Festival in Sacramento starting brewing. During an interview with WWE, Corey Taylor and Corey Graves seemed to be at odds at who would be the main attraction at this weekend’s upcoming super-festival. Was it the chart-topping, mask-wearing Slipknot and their fellow headlining music acts or was it the up & coming NXT superstars, who have been selling out venues and merch across the country?

One thing is for sure, we wouldn’t start a fight with either side, nor would we want to ever have to battle these two massive fanbases. Here’s a peek at what transpired backstage at the Quicken Loans Arena on July 22nd and why festival promoters are already wondering if they need to beef up security during the approaching Aftershock weekend.

Who do you think would win this war of words? The 9 madmen of Slipknot or the current NXT roster? Which rockstars might hop off stage and try to enter the world of NXT this weekend? Only one way to find out.

NXT has grown into one of the hottest brands in sports-entertainment over the past two years, thanks to the high-octane action it presents every Wednesday on the award-winning WWE Network. The Superstars and Divas of Tomorrow have also taken their show on the road, packing venues across the country with their high-energy performances.

It will be no different when WWE NXT takes over Monster Energy AFTERSHOCK 2015, October 24 and 25 at Gibson Ranch, just outside of Sacramento, CA. Don’t miss your chance to see NXT live, up close and personal!