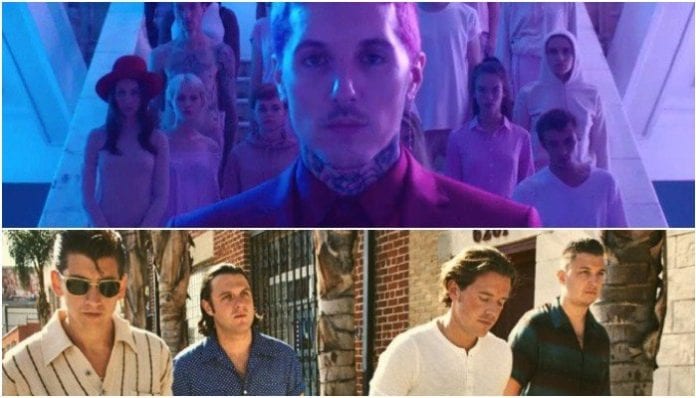 It looks like we have Arctic Monkeys to thank for some of Bring Me The Horizon‘s new sound.

After weeks of teasing, which included billboards randomly appearing with the phrase “Do you wanna start a cult with me?” proudly displayed, the band finally dropped our first taste of new music since 2015’s That’s The Spirit.

While there, Sykes discussed the process of writing new material for the band. Sharing that the “best stuff” is something that doesn’t just happen, saying:

“It’s always the best stuff you don’t get right away,” he told the radio. “You’re like, ‘Oh no, this ain’t right, this isn’t them. This isn’t what I know.’ And then after a week or two, or even a month, you realize, ‘Oh this is amazing’, and it’s not that it’s better than the thing that came before, but it’s different.”

Sykes also shared that the band wanted to do something new with their forthcoming record:

After talking the band’s latest single, and their slight change in sound, it led to DJ Annie Mac asking Sykes about another English rock group, the Arctic Monkeys.

As you might know, the other English act, Arctic Monkeys recently dropped their latest album, Tranquility Base Hotel & Casino, back in May.

The group’s sixth record has earned some pretty high acclaim, and it appears that Sykes had some praise of his own for the group when asked about them:

“Yeah, I do. Arctic Monkeys are actually one of my favourite bands going, which is really weird cos I went to school and college with them.”

He continued on by talking about the time he met the band’s frontman Alex Turner, where he had a bit of a “fanboying” moment (and honestly, who wouldn’t have a moment meeting the Alex Turner?!)

“He actually remembered me from school,” he said. “He was like, ‘Yo, yo, I’ve been waiting for ages to meet you.’ I were like, ‘No way you remember me.’ It was really cool cos I was like, ‘This is weird, I’m like inside fanboying but I shouldn’t be cos I know this guy. I went to school with him.”

After sharing the tidbit, Sykes then discussed how he “really admired” the group and their ever-evolving sound:

“You know for a fact that, whatever the next album’s going to be, it’s not going to be the same as the last one,” he said. “I just think that’s so cool.”

According to Sykes, the band’s fearlessness of changing their sound is something that inspired Bring Me The Horizon with their own writing in the past:

“But they’ve always inspired us because they don’t really care what they’re big for,” Sykes said. “They could always come out with a new album and do the same thing, and it’d be fine. But they always go, ‘You know what, we’re doing this.’ I think that’s lacking music at the moment, to be honest.”

You can listen to Sykes’ interview here.

In other BMTH-related news, salvation is officially here, and we couldn’t be more thrilled.

Check out Bring Me The Horizon’s new song below, and tell us what you think about it in the comments: