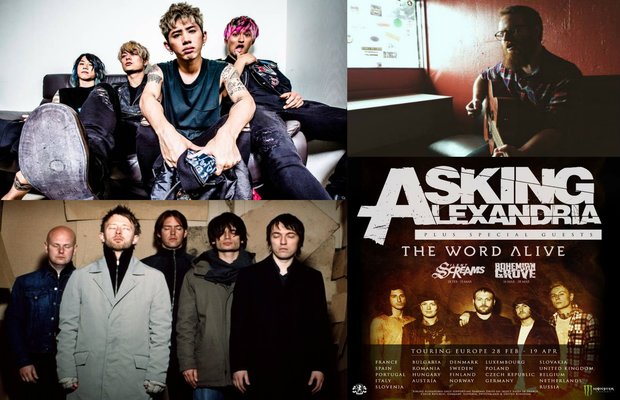 Read More: Green Day debut a new video and other news you might have missed today

These dates come in addition to their headlining sets at this year's Coachella festival. The band will start off on March 30 in Miami, and make stops in Atlanta, New Orleans, and Kansas City before hitting the west coast. Their two shows in Berkeley, California will take place back-to-back nights in between their two Coachella appearances. Tickets will be available this Friday, January 20.

Radiohead are touring in support of their ninth album, A Moon Shaped Pool. You can check out a full list of their scheduled North American tour dates below.

2. ONE OK ROCK have released a lyric video for “Take What You Want” ft. 5 Seconds Of Summer

This bright yellow lyric video will help you sing along to one of the most popular tracks from ONE OK ROCK's brand new album, Ambitions, which was released January 13 via Fueled By Ramen. The song features past tour mates 5 Seconds Of Summer and sure is an anthem. Take a break and jam out!

The band will be undertaking a massive European beginning at the end of February, traveling from the U.K. to Russia, and nearly every major European nation in between. Asking Alexandria will be joined by their friends, The Word Alive, Silent Screams, and Bohemian Grove. You can check out the full list of dates and purchase tickets on the band's website.

4. Aaron West And The Roaring Twenties have announced a handful of full-band shows!

The project of The Wonder Years' frontman Dan “Soupy” Campbell, Aaron West And The Roaring Twenties is a unique indie/folk band that he calls “a unique character study through music.” The band has announced four full-band shows that will all be taking place in the northeast during the first few days of March. AWATRT will be joined by Empty Houses and Dryjacket, which is bound to make these shows a special treat.

Read More: Lego and the University of Cambridge are looking for the world’s first professor of play

Due out in February on Closed Casket Activities, Diablo, Con Amor… Adios will be a three song EP from the California hardcore band. Xibalba have premiered the first track from the upcoming release, titled “Diablo.” The song debuted earlier today through CLRVYNT, where you can also read an extensive interview with the group's Nathan Rebolledo. Have a listen to “Diablo” below, and try not to break anything while you mosh along.

6. ONI have released a terrifying video for their song “The Only Cure” ft. Randy Blythe

The Canadian progressive metal band put out their debut album, Ironshore, via Metal Blade Records in 2016 and experienced a great deal of success. One of which was getting Lamb Of God frontman Randy Blythe to appear on their track, “The Only Cure,” which now also has its own video. The music video depicts a murderous plot, and the band's dark outlook is visually captured in unison with the gut-punching track.

“'The Only Cure' is about a guy getting captured by a serial killer and getting killed by getting his chest cut open,” explains Oni. Guest vocalist Randy Blythe of Lamb Of God adds, “What a super creepy video! Horror fans will love it – the production is Hollywood film-quality. It looks like something out of a 'SAW' or 'Hostel' movie. I had a lot of fun with the Oni guys recording this track, and it's cool to see the music set to such dramatic scenery. Nightmares…”

The song premiered exclusively through Billboard today. Check it out below!