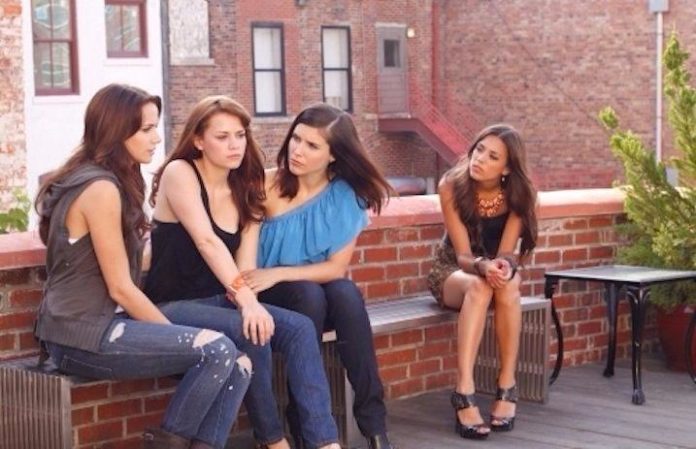 The former cast and crew members of One Tree Hill have shared a statement, accusing former showrunner Mark Schwahn of sexual harassment.

“Many of us were told, during filming, that coming forward to talk about this culture would result in our show being canceled and hundreds of lovely, qualified, hard-working, and talented people losing their jobs,” they write.

They spoke out in defense of writer Audrey Wauchope, who shared a thread of tweets regarding the sexual harassment the female cast and crew faced on the show’s set. “I’m furious and sad and everything else for the women who have sat on that couch next to that man. And I’m furious and sad and everything else that years later I don’t feel safe to be able to do anything real about this and that it seems to be happening all over this town,” she writes.

This thread about showrunners is so important. The writers room is a safe space. Safe spaces does not equal a space to safely abuse. https://t.co/cvlpCmwqey

In light of the Andrew Kreisberg reporting, a couple thoughts about my first writing job that I've wanted to say for years but have never had the guts to. When I was 29 my writing partner @RachelSpecter and I were hired as staff writers.

To say we were excited was an understatement. To say we left that job demoralized and confused is also an understatement. One of the 1st things we were told was that the showrunner hired female writers on the basis of their looks. That's why you're here – he wants to fuck you.

Rachel had been actress previous to writing and was told that he used to talk about her in the room before we were hired. So that's a safe room to enter as staff writers. Imagine what that does to ones psyche.

Imagine feeling for the rest of your career that you're possibly an imposter – that maybe just maybe you're only here because you're a body, not a mind. It creeps into your thoughts and keeps you up at night and makes you wonder.

Moving on. The staff sat on couches. Female writers would try to get the spot where the showrunner wouldn't sit as to not be touched. Often men would help out by sitting next to him, thus protecting the women.

Sometimes we wouldn't luck out and he'd just squeeze his disgusting body in between us and put his arms around us, grinning. He pet hair. He massaged shoulders. I know he did more but not to me so they're not my stories to share.

Ever since then I just state “I don't like to be touched.” This often makes me sound angry or not warm. It's just that I don't know anther way to make it clear I don't enjoy your unwanted touch.

Moving on. Men on staff were shown naked photos of on an actress he was having an affair with. Naked photos she didn't know were being passed around . Naked photos they didn't want to see. This is such a violation,both to the actress and to the men forced to look and participate

Moving on. The day before my writing partner left for her wedding he closed the door of his office and asked her if she really wanted to go through with it. Maybe he could have a shot? Hahahaha we said. That's crazy. He's crazy. NO. He's abusive.

He's a man in a position of power who was allowed to run a television show for years where this behavior continuously went on. I don't blame the men on that staff – I truly believe they were also in a way victims of psychological abuse and didn't know what to do.

Moving on. The day the studio lawyers came to give the sexual harassment seminar many of us had pointed questions we were going to ask. This will be the time we can speak and he will know we know! Guess who didn't show up?

That's right. The show runner did not attend the mandatory sexual harassment meeting. I don't blame the studio, I doubt they knew. I blame a system that allows one person to have so much power they can do whatever they want.

I write all this to say that there are trickle down psychological effects to all this bullshit and the town is littered with the collateral damage of abusers who have been given free reign. If you're sitting on one of these staffs please know whatever you are feeling is real.

I forgot we were staff writers on 2 shows. In the absense of a name I don't want to implicate the good ones. The men of Cougartown are aces.

And in response, the One Tree Hill cast and crew released a statement, sharing their gratefulness for Wauchope’s courageous statement and solidifying that “we are all in this together.”

Read their statement, via Variety, in full below:

To Whom It May Concern,

All of the female cast members of One Tree Hill have chosen this forum to stand together in support of Audrey Wauchope and one another. To use terminology that has become familiar as thesystemic reality of sexual harassment and assault has come more and more to light, Mark Schwahn’s behavior over the duration of the filming of One Tree Hill was something of an “open secret.” Many of us were, to varying degrees, manipulated psychologically and emotionally. More than one of us is still in treatment for post-traumatic stress. Many of us were put in uncomfortable positions and had to swiftly learn to fight back, sometimes physically, because it was made clear to us that the supervisors in the room were not the protectors they were supposed to be. Many of us were spoken to in ways that ran the spectrum from deeply upsetting, to traumatizing, to downright illegal. And a few of us were put in positions where we felt physically unsafe. More than one woman on our show had her career trajectory threatened.

The through line in all of this was, and still is, our unwavering support of and faith in one another. We confided in each other. We set up safe spaces to talk about his behavior and how to handle it. To warn new women who joined our ranks. We understood that a lot of it was orchestrated in ways that kept it out of sight for the studio back home. We also understood that no one was fully unaware. The lack of action that has been routine, the turning of the other cheek, is intolerable. We collectively want to echo the calls of women everywhere that vehemently demand change, in all industries.

Many of us were told, during filming, that coming forward to talk about this culture would result in our show being canceled and hundreds of lovely, qualified, hard-working, and talented people losing their jobs. This is not an appropriate amount of pressure to put on young girls. Many of us since have stayed silent publicly but had very open channels of communication in our friend group and in our industry, because we want Tree Hill to remain the place “where everything’s better and everything’s safe” for our fans; some of whom have said that the show quite literally saved their lives. But the reality is, no space is safe when it has an underlying and infectious cancer. We have worked at taking our power back, making the conventions our own, and relishing in the good memories. But there is more work to be done.

We are all deeply grateful for Audrey’s courage. For one another. And for every male cast mate and crew member who has reached out to our group of women to offer their support these last few days. They echo the greater rallying cry that must lead us to change: Believe Women. We are all in this together.

With Love and Courage,

Schwahn created the series, and was showrunner for the entirety of its eight-season run, Variety shares. He has yet to comment on the allegations.