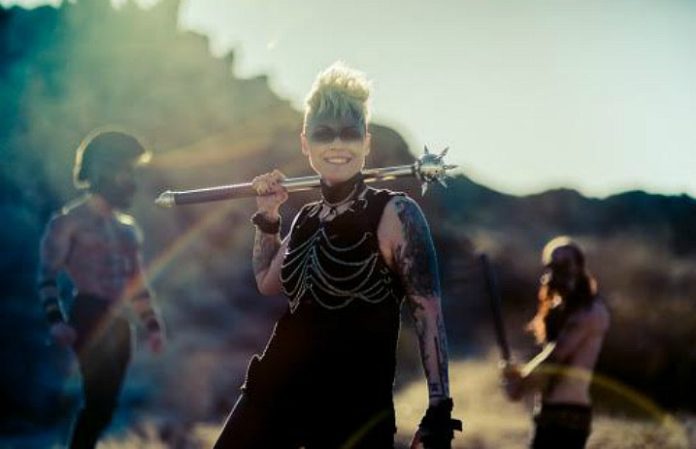 Activist Otep Shamaya, the namesake behind top-charting group OTEP, has released a powerful statement concerning an anti-LGBT purge inside the country of Chechnya.

This comes after the band's music video for “Equal Rights Equal Lefts” premiered at SXSW. You can watch that video, read the statement and see newly announced tour dates below.

Shamaya made her debut with OTEP back in 2000. They've released seven albums, a live album and an EP. She was nominated by GLAAD for the Outstanding Music Artist award and won MTV's prestigious Best Video for Music With A Message award. Alongside her staunch social activism, Shamaya also is a successful spoken word poet.

“As I type this, as your eyes pass over my words, an anti-LGBT purge is occurring inside the country of Chechnya. Hundreds of people have been kidnapped and imprisoned in concentration camps where they are confined, tortured and murdered. Chechen authorities dismiss the allegations, not because violent atrocities are immoral or unlawful, but because they claim “gays do not exist in Chechnya”. Not only is that preposterous and delusional, it summons a line from Hamlet, “The lady doth protest too much, methinks”.

I have no kind words or memes or delicate bits of wisdom for the Chechen government for I do not suffer fools. But I do have a message for those who are anguishing in the concentration camps: “You are not invisible. We bear witness. We see you. You are loved. You are not alone. We are fighting for you.”

I call on every member of the United States Congress and all decent souls around the globe to condemn these atrocities and demand the immediate release of all those illegally imprisoned in Chechnya. I'm grateful to Ambassador Haley for condemning these crimes on record. Indeed our elected officials should use every procedure, program and course of action in their power to force this attempted genocide to end at once and for these concentration camps to be blasted to rubble.

History has shown that evil will test the strength and will of the good. The ghosts of those we lost in the killing camps of Auschwitz and Dachau still weep at our apathy. We cannot afford another single moment of silence.”

“Equal Rights Equal Lefts” has been banned in over 20 countries. Here it is:

Lastly, OTEP are embarking on the second leg of The Resistance Tour (grab tickets here). On the first leg of the tour, OTEP donated bottled water to the people of Flint, MI.

“After 100 days of Trump, I miss George W. Bush, and I’m a bleeding heart liberal,” Shamaya says. “The second leg of The Resistance Tour will be an increased celebration of music and poetry dedicated to all of us who are actively resisting the Liar-and-Thief Donald Chump.

“For those artists who remain silent during these times of crisis, I say, ‘Shame on you,’” she continues. “To quote Nina Simone, ‘An artist's duty, as far as I'm concerned, is to reflect the times.’ So to those who stand with us, I say, ‘Thank you, from all of us, thank you.’ Music is one of the most powerful forms of art and has proven, throughout our own national history, to empower social change. RESIST.”