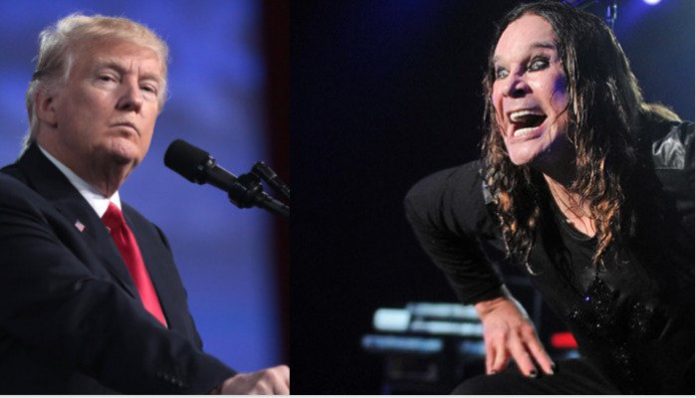 While Ozzy Osbourne got to show his pride for his grandkids use of “Crazy Train,” he’s pissed about a new political use of the song.

President Trump was using the track as a means to mock the Democratic Party for their recent primary debate in a video on Twitter.

The video starts with footage of the debate’s technical difficulties paired up with the intro to the classic Ozzy track.

According to Rolling Stone, Ozzy and his wife Sharon Osbourne are pissed about the president’s use of the song.

“Based on this morning’s unauthorized use of Ozzy Osbourne’s ‘Crazy Train,’ we are sending notice to the Trump campaign (or any other campaigns) that they are forbidden from using any of Ozzy Osbourne’s music in political ads or in any political campaigns. Ozzy’s music cannot be used for any means without approvals.”

Continuing that, the Osbourne’s made some suggestions for Trump that come from musicians who support him.

“In the meantime, we have a suggestion for Mr. Trump: perhaps he should reach out to some of his musician friends. Maybe Kayne West (‘Gold Digger’), Kid Rock (‘I Am the Bullgod’) or Ted Nugent (‘Stranglehold’) will allow use of their music.”

Sharon previously appeared on Season 9 of Trump’s former show The Apprentice. In a 2016 appearance on Conan following the first debate between Trump and Hillary Clinton, she said she didn’t think he actually wanted to be president. Sharon has continuously voiced her concerns about the current administration since then.

In case you want to see a way better use of “Crazy Train,” Jack Osbourne shared a video of his two daughters singing along and rocking out to their papa’s classic jam.

The clip shows Jack’s oldest singing before her sister enters in classic middle child fashion stealing the show by headbanging.

Sharon shared the clip on her morning show, The Talk, getting an audible reaction from the studio audience.

What do you think of Ozzy’s response to Trump’s unauthorized use of “Crazy Train”? Let us know in the comments below.