2019 was a troubling year for Ozzy Osbourne‘s health. A bout of pneumonia and a bad fall caused tour cancellations and a lot of worry about The Prince of Darkness. But due to a gossip site, New Year’s Day was quite a shocker for those who care about Ozzy.

The website Radar Online reported that Ozzy Osbourne was on his deathbed and didn’t even recognize his wife, Sharon anymore. That’s when daughter Kelly stepped in.

The gossip site released an article making a swathe of claims about Ozzy. Some being about how he couldn’t recognize Sharon and didn’t realize she wasn’t there for the holidays. Some “insiders” also claimed that Ozzy wanted to die.

“Ozzy is in chronic pain and begging to be put out of his misery!” an insider said. “He’s in such bad shape that he didn’t even notice Sharon wasn’t there.”

Osbourne daughter stepped in on Instagram after noticing the report and stepped in to set the record straight.

Today I had a wonderful start to 2020. I went out to lunch with my family. Then I spent the rest of the day laughing and hanging out with my dad. I come home to read sickening articles about my dad supposedly being on his ‘death bed’ sometimes the media makes me sick!!

“It’s no secret that my dad has had a rough year when it comes to his health but come the FUCK on this is utter bullshit. 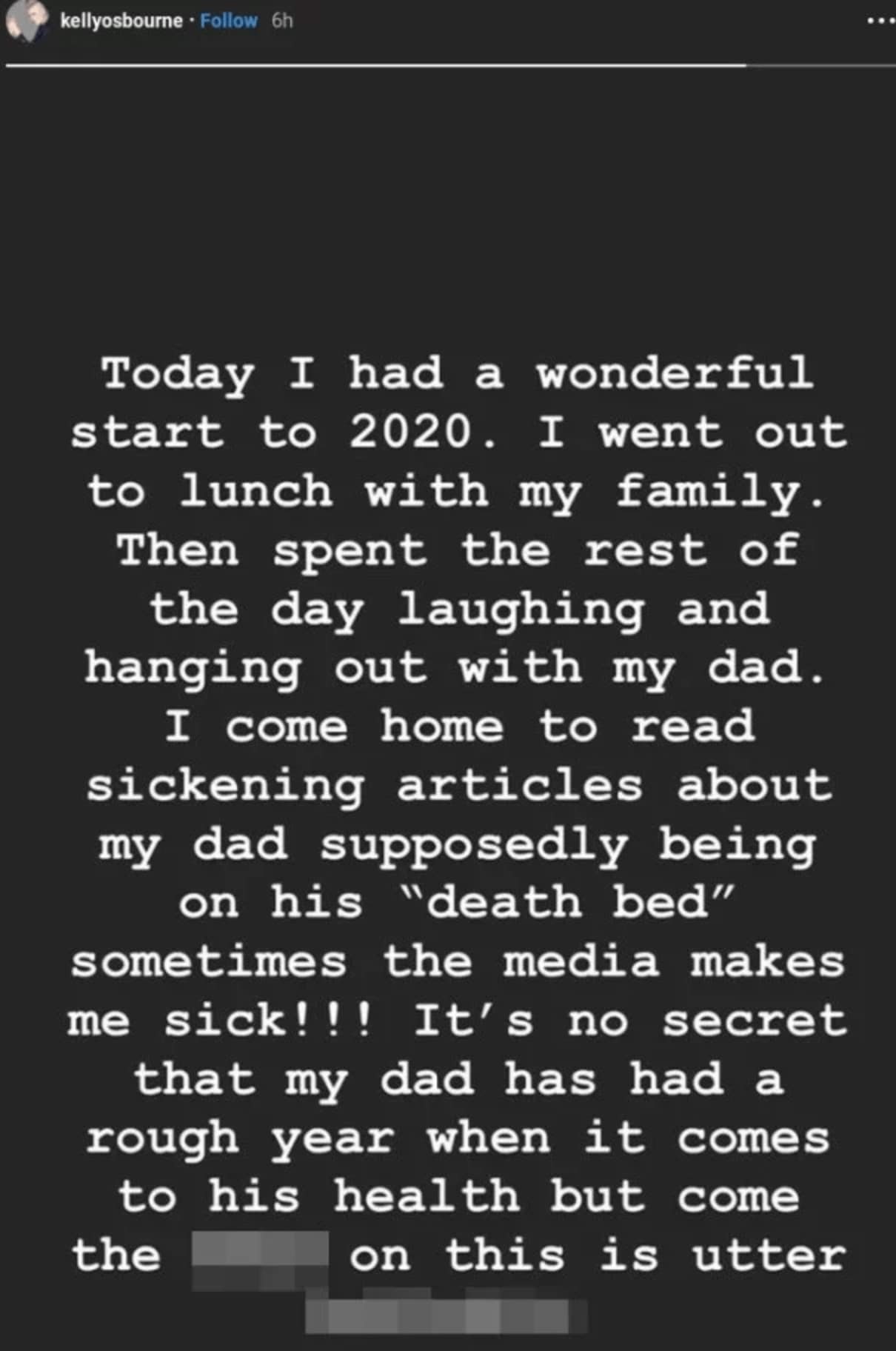 A week before the website posted about Ozzy’s alleged agony, his som Jack posted the photo of the family during the holidays. Ozzy looks pretty okay here.

Ozzy even seemed to poke fun at the gossip article with the below tweet. He says “Uh…” and posts a video to his song “Alive”

We’re glad The Prince of Darkness is okay. He has a lot of shows to play in 2020.

The music video is an intimate portrayal of a darker time in Ozzy’s past.

Ozzy Osbourne’s music video for “Under The Graveyard” is rather tough to watch. It’s a mini-documentary of sorts. The video opens with a young Sharon Osbourne talking about how Ozzy had gone missing. Taking place in the late 1970’s we see a young Ozzy drinking and doing drugs and partying and drinking some more.

This spirals out of control we see Sharon going to look for Ozzy, who is incapacitated in a hotel room. She finds him and they begin a journey back to recovery.

Ozzy Osbourne commented about how intimate of a portrayal director Jonas Akerlund and actors Jack Kilmer and Jessica Barden pulled off.

“For ‘Under the Graveyard’ Jonas (Akerlund) developed the story into a ‘mini movie,’” Osbourne says. “But, to be quite honest, it’s hard for me to watch because it takes me back to some of the darkest times in my life. Thankfully Sharon was there to pick me up and believe in me. It was the first time she was there to fully support me and build me back up, but it certainly wasn’t the last.”

This gives us a glimpse into the dark times in Ozzy’s past and how love and a helping hand can make a big difference.

What do you think of the alleged Ozzy story? Sound off below!