Palaye Royale get inside their own heads in new video—watch

Palaye Royale recently wrapped up the Funeral tour to mark the end of the Boom Boom Room era, but they’re certainly not going anywhere.

Last week, the band teased two new tracks were on the way ahead of their run supporting Marilyn Manson and Rob Zombie, and now they’re making good on that promise. With “Nervous Breakdown” and “Fucking With My Head” announced, Palaye Royale delivered the latter first.

“Fucking With My Head” will sound familiar to any fan who caught the band on tour from last fall to now. Last year, the trio hit the road for the Final Boom tour where they played tracks off Side A and Side B, but they also introduced a new song.

While the track made its away into the Final Boom’s setlist, one of the first times they played it was just prior to that. On Sept. 21, the band hit the stage for a special show at Las Vegas-based the Church Of Rock And Roll. They took part in a performance that aimed to make the music community more inclusive. With the help of Music: Not Impossible technology, deaf and hearing impaired fans were able to experience the show in a “surround body” way.

The band played the new track to an audience wearing a five-piece device consists of a vibro harness, two wristbands and two ankle bands that pulsed along to the music. The band of brothers’ mother Stephanie shared a video of the early performance, which you can see below.

Now after nearly a year of playing it live, Palaye Royale are officially sharing the new track as their first release since Side B in September. After the band announced the songs were on their way, drummer Emerson Barrett also revealed the videos will have hidden symbols from his upcoming comic book series.

“‘Fucking with my head’ and ‘Nervous Breakdown’ music videos concept were inspired by a chapter from the comic book.” he wrote in a tweet. “Each video is full of hidden symbols and meanings hinting at further storylines in the comic book. X You never really know in which direction progress lies”

Just ahead of the video’s release, the band shared a first look at Barrett’s Neoutopian Graphic Novel.

One hour until the ‘Fucking With My Head’ music video is released. Here is a few teaser scenes from the upcoming Neoutopian Graphic Novel illustrated and written by @EmersonBarrett and @xobillie . We are looking forward to seeing the the royal council present their theories. pic.twitter.com/ZcCx3e4pLY

The band then shared the video, writing, “Soldiers of the Royal Council, a new era has begun. Watch the music video for “Fucking With My Head” at http://bit.ly/PalayeRoyaleFWMH …. Presented in conjunction with Lieseil Inc. #PalayeRoyale #FuckingWithMyHead #LieseilINC”

Check out the new video for “Fucking With My Head” and give us your theories in the comments below.

More on Palaye Royale and “Fucking With My Head”

After Barret’s tweet teasing the concept, the band further sent fans into a frenzy when releasing the single artwork, which features the word “Lieseil Inc.” in the bottom right corner.

Fucking With My Head single & music video is set to release this evening.

The trio retweeted one fan pointing out the mysterious word who also shared a screenshot of two old tracks making reference to the word. The band first dropped “Cemeteries No. 02. (Dreams Of Lieseil)” on their 2013 The Ends Beginning EP. Lieseil, Inc. appeared again in “How Do You Do?” off 2016’s Side A.

The band recently released the art film for “How Do You Do?” after its deletion, making the timing all the more interesting.

@PalayeRoyale the song isnt even out yet and yall are already Fucking with our heads. Care to explain. pic.twitter.com/H3ikol3NOf

Palaye Royale continued to draw attention to Lieseil Inc. in another tweet and then on Barrett’s Instagram story. “They control you, they watch you, they poison you, brainwash you and alter you. This is the new order. A Lieseil, Inc. way of life, better living experimentation,” he wrote on a zoomed in capture of the single art. 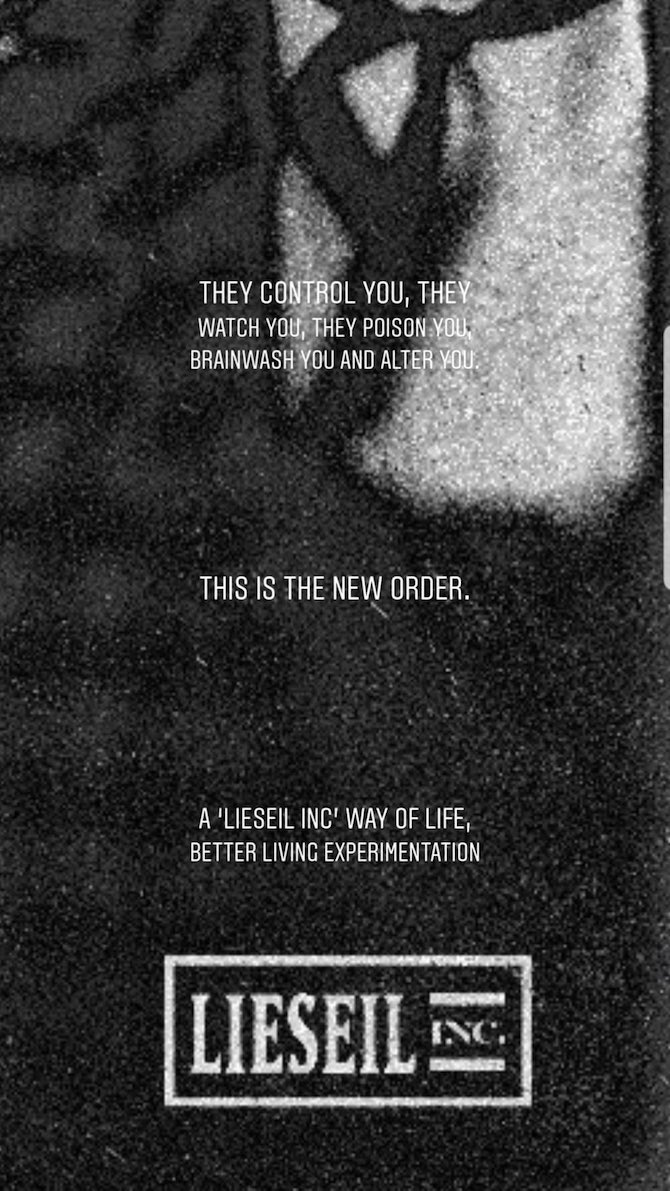 The drummer also clued in fans on the concept, sharing a video that read, “How do you think we all got these ‘X’ on our hands? The doctors at Lieseil experimentation facility had to mark us…”

The band kick off their run supporting Manson on the Twins Of Evil Hell Never Dies U.S. tour beginning July 9. A full list of dates is available below and tickets here.