The award was broken upon return.

Panic! At The Disco finally had their APMAs award for “Song Of The Year” returned to them and a heartfelt apology note with it.

The theft reportedly happened during the band’s tour in the House Of Memories that allowed VIP members to explore a lounge filled with rare memorabilia.

The lounge was filled with iconic souvenirs, three of which were taken from the display. in addition to the APMAs award, a robe Brendon Urie wore in the music video for “Victorious” and a rare polaroid from 2007 were also swiped.

Tour manager Zack Hall first tweeted about the incident in August 2018, stating the Polaroid was stolen. However, several hours later, the photo was returned.

An extra special fuck you to the person that stole the Polaroid from one of my HOM cases today. I took that photo of Brendon and Ryan when we were out to dinner in 2007. This really bums me out.

Update: the picture was oddly returned to me. I don’t fully understand but I don’t need to. Thank you to the person who got it back to me. Guys I want to share all of this stuff with you that I have held onto over the years but you make it so hard when you keep taking it from me.

Hall brought up the “Victorious” robe and APMAs award in September, and the latter item finally made its way back to P!ATD.

I can officially say that I just cleaned out @brendonurie ‘s P.O. Box and neither the stolen AP award or the stolen robe from the Victorious video were returned. pic.twitter.com/pP2jqNDWH1

Tonight, Hall posted a photo of the award, which was suspiciously broken in half, on Instagram, along with a note.

“Went and emptied out the fan mail P.O. Box and look what was in there. I guess even though it’s broke in half, at least we got it back….?” the caption read.

As far as the note, it is addressed to Urie and is extremely apologetic.

“I am so sorry for taking this, and regardless if it’s just a prop or not, I sincerely apologize with all my being,” the note reads. “I was extremely drunk and made a very poor decision while in this state. Since then, I have felt beyond unsettled about the matter. Both as a person and a musician, you have impacted my life tremendously.”

“Ever since I would listen to Fever and Pretty Odd on my 8th grade bus rides, I knew my life was changed,” it continues. “Best wishes on the rest of this tour and your future endeavors.”

As for the robe, Hall also clarified that the item is still missing in the comments of the post about the award’s return.

A fan asked, “did you guys ever get the victirious robe back??” to which he offered a simple, “nope.” 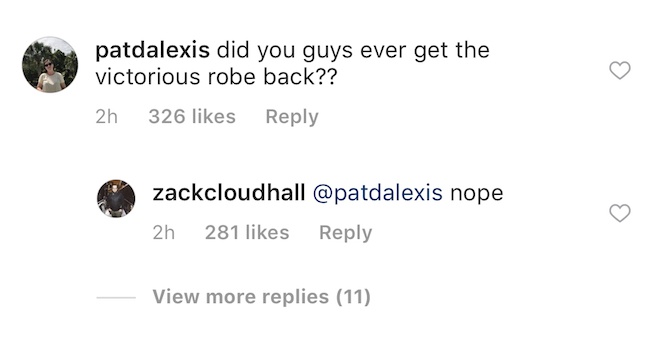 Went and emptied out the fan mail P.O. Box and look what was in there. I guess even though it’s broke in half, at least we got it back….?

The band won the award for their song “Hallelujah” in 2016. You can see Urie’s acceptance, which was video recorded, below.

The group also performed the song at the APMAs in 2015, which you can see below too.

In more recent news, Panic! recently responded to an amazing video of Dale Earnhardt Jr. was filmed shotgunning a beer to “High Hopes.” You can watch the video below.

When I say shotgun, you say…

Also, Urie recently just featured in Lil Dicky’s huge collage with nearly 30 artists. You can watch the video for that below.

Also, Panic! will perform at the Billboard Music Awards for the first time ever. The band is also up for  four awards that night, including Best Rock Song with “High Hopes.” They will also be going against twenty one pilots, Dave Matthews Band, Mumford & Sons and Imagine Dragons for Best Rock Album.

The awards show will be held at MGM Garden Arena in Las Vegas May 1, and it will air live at 8 p.m. ET on NBC.

What do you think of Panic! Getting their APMA back? Sound off in the comments below!