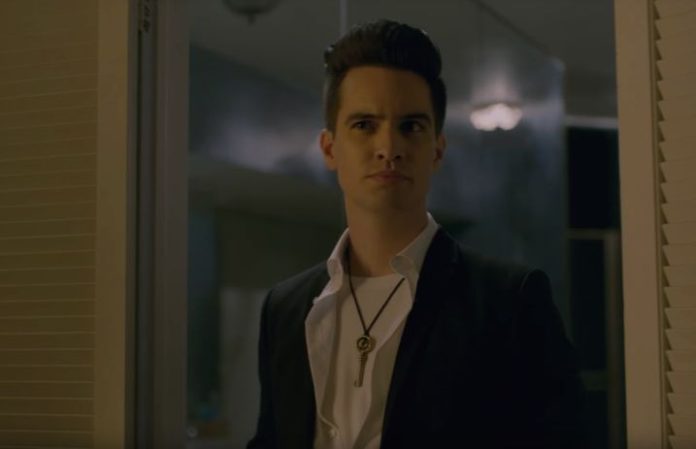 Panic! At The Disco fans, the wait is finally over. The band have finally debuted their new song “Say Amen (Saturday Night),” taken from their forthcoming album Pray For The Wicked, out June 22.

And, as expected, the music video is a true masterpiece.

As you may or may not guess, the music video for their groovy-as-hell club banger “Say Amen (Saturday Night)” is a recognizable prequel to “This Is Gospel” and “Emperor's New Clothes.”

When asked if the character in the song was looking for redemption or riding in the dining car of a hellbound train, frontman Brendon Urie says he’s trying to reconcile his career as well as the vestiges of his Mormon upbringing. “There may be a sad underlying message, but for the most part, I’m just really taking back my tradition—I’m doing my job,” he tells AltPress.

“I’m not really religious at all. I mean, you could argue that I am. I don’t know: It’s something about the way I was raised that I can’t knock all of those traditions that I feel so positive about. On this one, I compare myself to the wicked, but do I consider myself wicked, as well? There’s a dichotomy there, for sure.”

Oh, and in case you were wondering, it is the track he teased on his Instagram Live last month. When asked if there were actually repercussions, Urie replies with his it’s-all-good bravado.

“Naaaah. I got a call the next morning that was something like [imitates industry-type afraid of coming off as heavy], ‘Soooo…hey, how’s it going? [Laughs.] So you did this thing… annnnnd…it’s totally fine, we don’t want you to think we’re coming down on you…but maybeeee a little more…mystique?’ I hate being told what to do, you know that,” he concludes, laughing. “It was just like a parent: ‘We’re not mad. We’re just disappointed…’”

Frontman Brendon Urie looks dapper, as per, and it's a thrilling video we'll be watching on repeat.

Watch the video for “Say Amen (Saturday Night)” below:

Pray For The Wicked is due out June 22, and it's currently available for preorder here. The band will be touring in support of the record this summer, and you can check out the full list of cities and dates below!