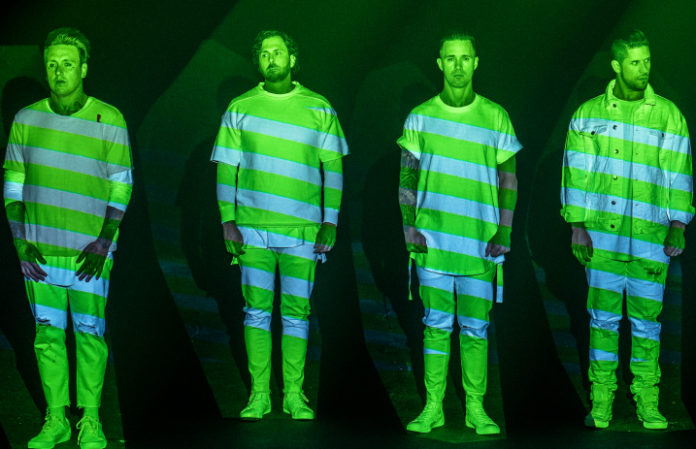 Papa Roach have debuted a new music video for their song, “Periscope,” taken from their record Crooked Teeth, and we caught up with Jacoby Shaddix to talk more about the making of the music video and working with Skylar Grey.

Give the video a watch, and get a behind-the-scenes look at the making of the video, below!

AP has some awesome behind-the-scenes shots of the music video shoot. See them below:

Read on to see what Shaddix had to say about the vision behind their new video, which they shot with Skylar Grey, below:

Alt Press: What was the original meaning behind the song, and how did you make that come to life in the music video?
Jacoby Shaddix: Periscope is inspired by love and being loved and the realization that sometimes you might not be worth being loved, and the struggle within that—how much work it takes to make things work.

As far as the music video, we’re super happy with and proud of the video. One part I think is really special is when Skylar and I are in the shot at the same time but we’re not engaging with each other—I think that represents the disconnection within the song.

What was the concept behind the music video?
Visually we wanted to make something that stood apart from anything we had done before. As far as the projection art and visual concept, it was brought to us by The Uprising Creative—Jesse Heath, Danna Takako, and Darren Craig – who did an exceptional job making the visual feel artistic and not necessarily the traditional ‘rock band’ music video for this song.

How was it working with Skylar Grey on the video set? What was that energy like?
Skylar—she’s badass. She’s calm, cool, collected, and had a very direct vision of how she wanted to look in this video. We have the utmost respect for her as an artist, and she brings such an amazing element to this song and video.

What are you hoping fans take away from the song or the video itself?
I just hope they like the song—we're not trying to teach any lessons here but I really hope this song connects with people on a deep life level.

What are your thoughts on the band's new video—and the behind-the-scenes photos? Let us know in the comments below!