Paramore clarify year-end reflection is “not a breakup announcement”

Despite some silence, Paramore say things aren't over.

Paramore and Hayley Williams have been rather quiet for about a year as the last show they played was back in September 2018. It’s been some time since Williams and crew were together and not much has been said about the future of Paramore until June when they posted a muted video.

Nothing transpired from it, however, and Williams does regret leaving fans question the future for the band. Today they took to Instagram, sharing a year-end post reflecting on the band’s time together before clarifying it didn’t mean a breakup was in store.

Happy holidays and stuff from the kids who stuck together. from post-school carpools to and from band practice… to traveling the world to play our songs. even to flying across the country to support each other in our own respective adventures.

we’ve known each other through every phase of life thus far… still so much more to go! 6 months from now all 3 of us will be in our 30’s. not sure how that happened. we should also say thanks to you, while we’re here, for carrying the torch for the band and believing in all the ways we’ve found to create. we love us and we love you too. photo by our manager of 15 years: dad mercado.

Following the post, Paramore took to their Instagram story to send fan’s to their feed and clarify it didn’t mean they’re breaking up. 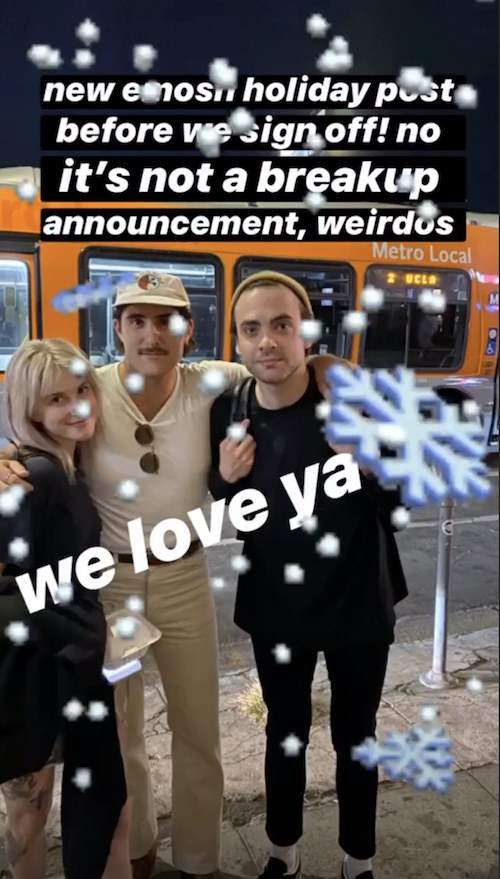 YOU HAVE NO IDEA HOW MUCH THIS PIC MEANS TO US🥰

WE MISS YOU GUYS pic.twitter.com/xZlx2HIr5w

Read More: 10 holiday concerts you can attend to ring in the new decade

But with this new photo of all members together, maybe it means there is a possibility for something new on the horizon.

Over time, Paramore has seen a lot such as line-up changes when drummer Zac Farro departed from the band in 2010. His brother, and lead guitarist, Josh Farro also left at the same time. After some teasing though, Zac announced that he would return behind the kit for the bands latest album, After Laughter.

After the release of After Laughter, Paramore set on a world tour for almost a whole year, kicking off in May 2017 and finally concluding in September of 2018.

The first and final shows were held in Nashville, Tennesse and in between that time, Williams made the decision to retire their hit “Misery Business” during their show, saying, “Tonight we’re playing this song for the last time for a really long time.”

Check out fan footage of the announcement below.

In addition to retiring the song, Williams has also taken another hiatus from social media in a form of “self-care,” and despite the break, she has taken the time to focus on herself and her mental health. She also urged fans to take care of themselves saying “try to believe that you are worth more than just “okay”…or “been better”…or “can’t complain…”. i think we are all worth experiencing joy. we are worth feeling hope.”

Even though Paramore hasn’t been as active, Williams stays busy with her hair dye company, Good Dye Young and that it’s her “main bitch.”

Paramore has a long history behind them, 15 years in fact and that’s impressive on its own. Whether we will see more from them or not soon is hard to tell but we can only hope something happens. After all, the caption does say “still so much more to go!”