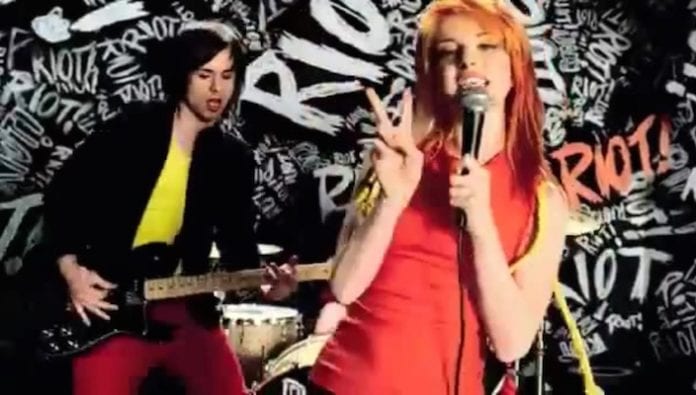 The track, which appeared on 2007’s Riot!, has been scrutinized in the past because of the lyrics, “Once a whore, you’re nothing more/I’m sorry that’ll never change.”

Read more: Are we done asking Hayley William’s about that “Misery Business” lyric

Frontwoman Hayley Williams made this declaration while the band headlined their inaugural Art + Friends on Friday at Municipal Auditorium in their hometown of Nashville. The show signaled the end of the After Laughter album cycle.

“Tonight we’re playing this song for the last time for a really long time,” Williams says from the stage. “This is a choice we made because we feel like we should.We feel like it’s time to move away from it for a little while.”

She also asked fans to send it off with all the energy and love they could muster.

You can see fan-shot footage of Williams’ making the announcement below.

This is far from the first time the band have addressed the controversy surrounding the song. Last year, on the anniversary of the video’s release date, Williams Tweeted about how people can change.

She also addressed the people who questioned her feminism because of the song.

for the record, folks- this whole miz biz conversation was yrs ago. literally. tired of sensationalism around what’s “good”/”bad” feminism.

In an interview with Track 7 for Riot!’s 10th anniversary, Williams expanded on how she’s changed since writing the song many years ago.

“The thing that annoyed me was that I had already done so much soul-searching about it, years before anyone else had decided there was an issue,” Williams says. “When the article began circulating, I sort of had to go and rehash everything in front of everybody. It was important, however, for me to show humility in that moment. I was a 17 year old kid when I wrote the lyrics in question and if I can somehow exemplify what it means to grow up, get information, and become any shade of ‘woke’, then that’s a-okay with me.”

Even before that in a blog post in 2015, Williams wrote: “Misery Business is not a set of lyrics that I relate to as a 26-year-old woman. I haven’t related to it in a very long time. those words were written when I was 17… admittedly, from a very narrow-minded perspective. It wasn’t really meant to be this big philosophical statement about anything. It was quite literally a page in my diary about a singular moment I experienced as a high schooler.”

You can see video of the final (for now) performance below.

this video fucking sucks because i was freaking the fuck out but rip misery business </3 pic.twitter.com/Yd4vy5WHKW

This wasn’t the band’s only live milestone last night. They also performed the heart rending “Tell Me How” live for that first time. Needless to say it’s been an emotional night for Paramore fans.

Paramore retiring Misery Business + the recordings of Tell Me How have both destroyed me emotionally. pic.twitter.com/sk3fIRz0Er