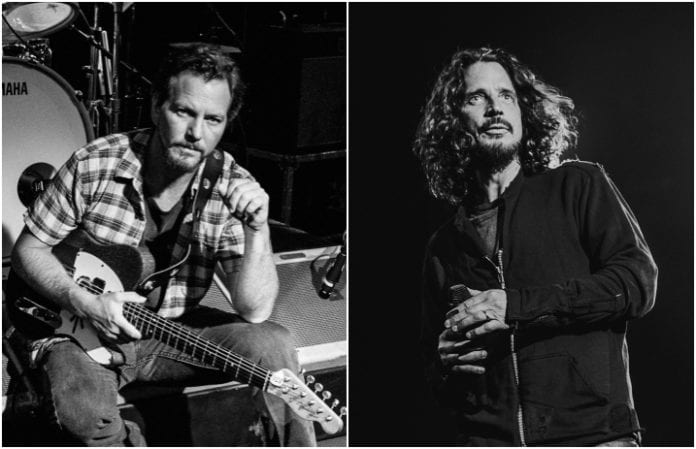 Eddie Vedder offered a few quiet salutes to Soundgarden's Chris Cornell at his performance in Amsterdam on Saturday, the Pearl Jam singer playing his first show since the death of his one-time Temple Of The Dog collaborator.

Since the Soundgarden and Audioslave frontman's reported suicide on May 18, numerous artists have paid tribute to the late musician. Noticeably absent from that first wave of remembrances was a word from Vedder, who's kinship with Cornell dates back to the pair's early '90s grunge scene days in Seattle.

On Saturday night, however, Vedder subtly nodded to the impact of Cornell's death at the first of his three solo shows at Amsterdam's AFAS Live.

Opening the gig with Pearl Jam's 1995 Neil Young collab, “Long Road,” Vedder apparently amended some lyrics in honor of Cornell, singing “Without you/Something is missing,” instead of the song's recorded lyric, “But still/Something’s missing.” (via Rolling Stone)

While Vedder didn't mention Chris Cornell by name at the concert, fans on the official Pearl Jam forum are describing the show's mood as undeniably affected by the 52-year-old musician's unexpected death this month.

At one point in the show, Vedder reportedly responded to a concertgoer's shout of “I love you!” with some unspecified condolences to Cornell's family:

“Thank you. I need it. We all need it. I'm thinking of a lot of people tonight. And some in particular and their families. And I just know that healing takes time if it ever happens. It takes time, and that means you have to start somewhere. So let it be music. Let it be love and togetherness. And let it be Amsterdam.”

Watch some video of Vedder's performance below.