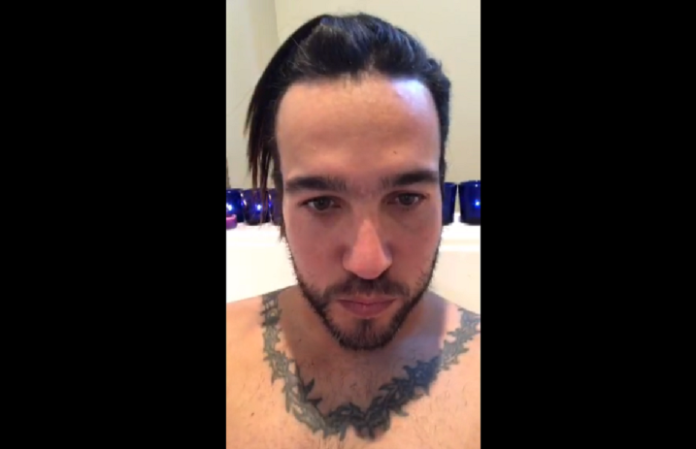 In 2011, Fall Out Boy's Pete Wentz made a promise: to livestream a bubble bath when he hit 3 million followers on Twitter.

The day finally arrived and the results are nothing short of incredible—watch the video in full below.

if i ever hit 3 million followers im gonna livestream a bubble bath and answer questions. so weird.

this is happening soon, but replacing the bubbles w/ the purple M A N I A bath bomb #FallOutBath https://t.co/6P3667ZLGA

Seven years after tweeting he'd livestream a bubble bath and answer questions, tweets from fans reminding him of the promise and over 6.6 million followers, Pete finally did it. Although it wasn't a bubble bath, things got even better because  he used a M A N I A bath bomb (yes, they exist, are purple AND smell of lavender)

The Fall Out Boy bassist went live on Instagram and talked about his favorite songs on the latest album, most beloved things about Chicago and Gaten Matarazzo of Stranger Things, among other random topics.

@petewentz PETER LEWIS KINGSTON WENTZ lll YOU HAVE 3.3 MILLION FOLLOWERS. DO. IT.

Needless to say, we loved every second of it. However, we are particularly interested in one of the answers, which got us pretty… hopeful. A fan asked Pete if he'd do a drunk history of Panic! At The Disco and return the favor to Brendon Urie and the answer was positive.

On AP 346, Brendon told AP that Pete say he'd do it only if Panic won a Grammy. “He told me that if I won the Grammy, he would drink only out of the Grammy and then do Drunk History,” Brendon shared, “That's my goal for getting a Grammy now: having it for myself and also having the retribution of having Pete get drunk out of it.'”

However, now Pete is changing his answer to: “Let's see how and when.” Does that mean the Drunk History video could come before Panic's Grammy? We're ready.

Judging by their reactions on Twitter, fans enjoyed the #FallOutBath as much as we did—it even got to trending topics:

#falloutbath is a hashtag and it has an attached emo-ji. These are wonderful times we are living in. https://t.co/LjCceTtDZY

Watch 20-minute-long bath in full below:

What did you think of the livestream? Should Pete do it again? Let us know in the comments!