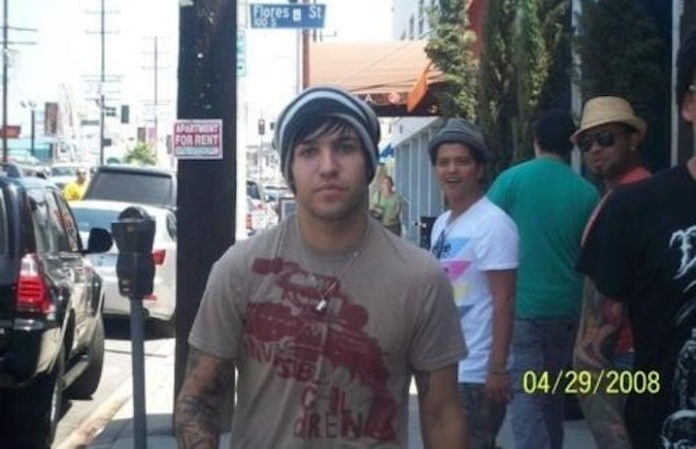 Today is an important day in history.

Because on this day in 2008, a photo was captured that's supplied such extended amusement that it's now celebrating its tenth year of meme fandom.

That photo is of singer Bruno Mars being (seemingly) surprised to see Fall Out Boy's Pete Wentz on the street.

A pre-fame, fedora'd Bruno. An Infinity On High-era, beanie-blazin' Wentz. An “Apartment For Rent” sign. Serendipity. This image has it all, and its totality is what preserves its reverence among candid pop culture pics:

It was taken, apparently on the streets of Los Angeles, by some lucky shutterbug with the forethought to date-stamp the pic for posterity. From there, the snapshot blew up on Tumblr, propelling its marvelous composition through space and time and into our hearts…forever.

Signifying the picture's peculiar but enduring appeal, Wentz commented on the photo to New York magazine in 2016:

“What an odd picture. I think specifically because it's dated but also how it almost seems posed due to everyone’s faces and demeanor. I’m a big Bruno fan and have been since he sang 'Billionaire' with Travie [McCoy].”

Those who hate fun will point to Mars' debunking of the pic's starstruck origin myth. Apparently shoved by the photog gunnin' to snap the pic, his wide-eyed stare was a reaction to the sidewalk slight, not a bewilderment at Wentz's presence. (Enjoy your Grammys, Bruno—let us have the legend.)

Sum 41 Paris gig canceled after firecracker set off nearby, venue...