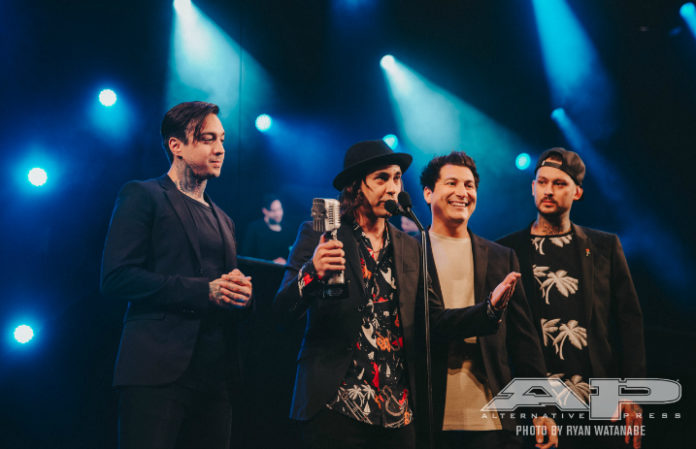 Pierce The Veil’s Misadventures has won Album Of The Year Presented By Journeys at the 2017 Alternative Press Music Awards!

“Oh my god! What a way to celebrate 10 years of our band being together,” celebrated the band.

Misadventures, Pierce The Veil’s fourth full-length, released May 13, 2016 via Fearless Records. Produced by Dan Korneff, it debuted at No. 4 on the Billboard Top 200 chart.

Three years in the making, the record was a labor of love and mania for the San Diego quartet, reconciling frontman/guitarist Vic Fuentes’ need to get the exact sound in his head out into the world. Compromise and deadlines be damned!

Pierce The Veil wrapped up the We Will Detonate! Tour with Sum 41 this spring. They’re heading out with rock giants Rise Against for a tour later this fall (check out those dates below).

Andy Black’s The Shadow Side, Tonight Alive’s Limitless, Architects’ All Our Gods Have Abandoned Us, Attila’s Chaos, Beartooth’s Aggressive, Every Time I Die’s Low Teens, I Prevail’s Lifelines, Moose Blood’s Blush and Waterparks’ Double Dare were all nominated alongside Misadventures.

Pierce The Veil performed at this year’s APMAs, too! Don’t miss out on any of the APMAs action — watch for free via Amazon and Twitch for up to 72 hours after the show.